Political risks to watch in Syria 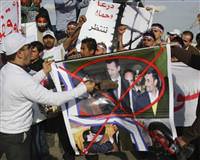 Syrian President Bashar al-Assad, who had boasted his country was immune to the unrest lashing the Arab world's autocrats, is now fighting for political survival.

The 45-year-old leader has tried economic carrots, political concessions and brute force to try to quell a popular upheaval that rights groups say has cost over 450 lives in six weeks.

Syria, mired in its gravest crisis since Assad's father crushed an armed Islamist revolt in 1982, risks international opprobrium and sanctions for its repressive response. The Assad family's grip on power looks at its shakiest in 30 years.

Instability in Syria, fulcrum of several Middle Eastern conflicts, carries huge but as yet uncertain implications for its neighbors, notably Lebanon and Israel, and for the region.

Here are some of the key risks to watch.

What sparked the revolt was the arrest of 15 youngsters for scrawling anti-government slogans in the southern town of Deraa, where the first three deaths occurred on March 18.

Protests gradually spread across Syria as people demanded freedom from three decades of Baath Party rule, against a background of grievances over economic hardship and corruption.

Assad, portraying unrest as the work of armed gangs paid by malign powers, replaced his government and coughed up a series of concessions that did not mollify protesters increasingly enraged by the bloodshed inflicted by security forces.

Their initial chants for reform soon gave way to the battle cry of Arab uprisings that had already unseated the rulers of Egypt and Tunisia: "The people want the downfall of the regime."

On April 21 Assad ended 48 years of emergency law and scrapped a hated state security court, but the killing of 100 protesters the next day seemed to make these moves a mockery.

Similarly, limited prisoner releases were counterbalanced by the detention of hundreds of other dissenters and protesters.

Economic handouts and job creation promises failed to calm the resentment of many Syrians who believe only a small group of crony capitalists has benefited from Assad's reforms, ostensibly aimed at overhauling an inefficient socialist-style economy.

So far the armed forces and security services, many of whose commanders belong to Assad's family and his minority Alawite community, appear to have remained loyal -- unlike in Egypt and Tunisia where the military helped usher presidents from power.

Assad's ousting is no foregone conclusion. His opponents may have breached the barrier of fear that has long underpinned Baathist rule, but ruthless repression could re-erect it.

The president can also play the "me-or-chaos" card which resonates with many Syrians. Some fear that militant Islamists could fill any power vacuum, others that civil war might engulf their country, as in next-door Lebanon and Iraq in the past.

-- Any signs of mutiny among the army and security forces

-- Any signs of protesters taking up arms

The United States has condemned Assad's use of force -- he sent army tanks into Deraa and two suburbs of Damascus on April 25 -- but Western nations which launched air strikes on Muammar Gaddafi's Libya have not acted against the Syrian leader.

The Arab League, which swiftly suspended Libya's membership over Gaddafi's efforts to quell opposition, has remained silent on Syria, although it issued a blanket condemnation on April 26 of the use of force against pro-democracy Arab protesters.

Western criticism of Assad's crackdown was initially muted, partly because of fears that a collapse of his minority Alawite rule might lead to sectarian conflict with the Sunni majority or bring to power Islamist militants hostile to Israel.

The United States, which had sought to isolate Syria after the 2005 assassination of Lebanese statesman Rafik al-Hariri, has more recently attempted to engage it, hoping to loosen its alliance with Iran and move it toward a peace deal with Israel.

Israel is in two minds. The removal of Assad, a foe who is allied with Iran and backs Lebanon's Hezbollah and Palestinian Hamas and Islamic Jihad, would seem a bonus. Yet Assad and his father have kept the border mostly quiet since the 1973 war, even though Israel still occupies Syria's Golan Heights.

No country has much leverage over Syria. Even Turkey, which has developed close links with Damascus in the last few years, has seen Assad ignore its advice to enact reforms.

The United States has kept sanctions on Syria since 2004. Its European allies may now impose travel bans or asset freezes on the Syrian leadership. Any move for U.N. sanctions is likely to be opposed by veto-wielding Russia, an old ally of Syria.

Iran could be a big loser if Assad's rule collapses because Syria, its main Arab ally since 1980, has facilitated Tehran's efforts to build a Middle Eastern "axis of resistance" to Israel and the United States via Hezbollah, Hamas and Islamic Jihad.

Lebanon, Iraq and other countries will worry that any ethnic or sectarian conflict in a destabilized Syria could spill across their borders, fuelling regional tensions between Arabs and Kurds, Christians and Muslims, or Sunnis and Shi'ites.

* Any Arab League position on Syria

The turmoil will hit an economy grappling with unemployment, poverty, and water and power shortages, along with falling oil output and rapid population growth of 2.5 percent a year.

The International Monetary Fund said on April 27 Syria was set for 3 percent growth in 2011 versus 3.2 percent in 2010, with inflation reaching 6 percent against 4.4 percent last year and the fiscal deficit widening to 6.8 percent of GDP from 4.8.

The unrest has ravaged the tourism industry, one of Syria's fastest-growing sectors, and may scare off foreign investors -- Syria has delayed bidding for its third mobile operator license, Saudi Telecom, one of the bidders, said on April 27.

A government goal of luring more than $40 billion in private investment to overhaul creaking infrastructure and create jobs over five years had looked implausible even before the protests, given corruption levels and uncertainty about the rule of law.

Despite fiscal strains, Syria has opened the spending taps to try to calm discontent, cutting taxes on some foods, giving cash to poor families, reducing income tax, raising the minimum wage and extending health cover to civil service pensioners -- measures the IMF says will cost about 2 percent of GDP.

Unemployment is officially 10 percent. Independent estimates say it is closer to 25 percent. The International Labour Organization says 60 percent of those aged 15 to 24 lack jobs.

U.S. sanctions bar the export of certain goods with over 10 percent of U.S.-produced components, restrict dealings with the Commercial Bank of Syria and ban the U.S. financial system from dealing with individuals linked to militant groups.

Any punitive measures by the European Union, which accounted for 36 percent of Syria's exports and 29 percent of its imports in 2008, would probably target Syrian leaders, not trade.