Syrian forces crack down on protesters in Banias 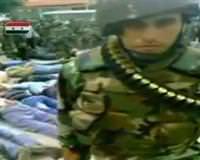 Syrian security forces swept into the coastal city of Banias on Tuesday, a protest leader said, taking control of another urban center from demonstrators challenging the authoritarian rule of President Bashar al-Assad.

"They moved into the main market area. The army has sealed the northern entrance and security forces (sealed) the south," Anas al-Shughri told Reuters.

"They armed Alawite villages in the hills overlooking Banias and we are now facing militias from the east," he said.

Assad, a member of the minority Alawite sect whose family has ruled majority Sunni Muslim Syria for 41 years, is pursuing a violent crackdown on six weeks of protests which began with demands for greater freedoms and now seek his overthrow.

Germany and Britain said they were seeking the imposition of European Union sanctions against Syrian leaders -- after a U.S. announcement of sanctions last week -- and France said Assad should be among the targets for sanctions.

"The Syrian government's continuing brutal actions leave the European Union no choice but to press firmly ahead with targeted sanctions against the regime," Germany's Deputy Foreign Minister Werner Hoyer said.

Last week Assad sent tanks and soldiers into the southern city of Deraa, where the uprising broke out on March 18. Syrian rights groups say more than 560 civilians have been killed by security forces since the start of the unrest.

Activists said arrests continued across Syria on Tuesday. Speaking from Egypt, Ammar Qurabi, head of the National Organization of Human Rights in Syria, said the latest wave of detentions had snared more than 1,000 people.

International condemnation of the crackdown has intensified since the Deraa assault, which revived memories of the 1982 repression of an armed Islamist uprising in the city of Hama by Assad's father, President Hafez al-Assad.

"Syria should not go through another massacre like Hama. We have reminded them of this," Turkish Prime Minister Tayyip Erdogan, who has sent envoys to Damascus and spoken to Assad several times during the unrest, told Turkey's A-TV channel.

Israel, which has relied on Assad and his father to keep their front line quiet for nearly four decades -- despite Israel's occupation of the Golan Heights and Syria's support for militants opposed to Israel -- said Assad was losing his grip.

"I believe Assad is approaching the moment in which he will lose his authority. The growing brutality is pushing him into a corner, the more people are killed, the less chance Assad has to come out of it," Defense Minister Ehud Barak said.

"POINT OF NO RETURN"

The International Crisis Group said the situation in Syria "is quickly going beyond the point of no return. By denouncing all forms of protest as sedition, and dealing with them through escalating violence, the regime is closing the door on any possible honorable exit to a deepening national crisis."

In Banias, a Mediterranean coast city that has witnessed some of the most persistent protests, Shughri said armed plainclothes security men had deployed in the market street and were making arrests.

Authorities have described mostly Sunni Banias as a "center of Salafist terrorism." Shughri denied residents had weapons and said youths carrying sticks were manning roadblocks, facing off against armed forces who spread out in the area.

Banias city center has been under the control of demonstrators since, according to residents, Assad loyalists known as "al-shabbiha" opened fire on April 10 after a protest demanding the "overthrow of the regime."

Six civilians were killed, according to residents and human rights campaigners. Authorities said at the time an armed group had ambushed a patrol near Banias, killing nine soldiers.

Foreign media are restricted from reporting in Syria, but residents of the southern city of Deraa told Reuters by telephone that security forces were still making arrests.

"They are still dragging anyone who is less than 40 years of age to the Deraa stadium where they have held hundreds, including several women, in the last week without shelter," said Abu Muhammad, a resident.

Residents said conditions were worsening in the city, especially in the old Balad district. "In the Balad area the stench of dead corpses is still everywhere," said Abu Wadah.

Officials say the army stormed Deraa in response to appeals from residents, and blame the violence on armed Islamist groups. They say most of those killed have been police and soldiers.

The Red Cross called on Syria to grant immediate safe access to people wounded and those being detained by the authorities.

Wissam Tarif of the human rights Organization Insan said the Damascus suburbs of Zabadani and Madaya had been without communication for five days. "Military and security men have been raiding houses" since early on Monday, he said.

The Interior Ministry offered an amnesty to protesters who surrender to security forces, saying people who carried guns, attacked security forces or "spread lies" would be spared punishment if they hand themselves over by May 15. It also urged them to supply information about "saboteurs, terrorists and weapons caches."