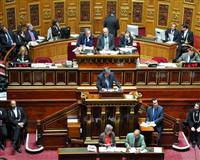 A bill which would criminalize the denial of allegations of a supposed 1915 'genocide' against Armenians was dropped by the French senate before it was taken to a vote.

Prior to the bill, referred to as the 'denial bill' was voted on an anti-proposal was approved. The proposal passed with 196 affirmative votes and 74 against, resulting in the dropping of the 'denial bill' which will no longer be brought to the General Assembly.
While the proposal was being deliberated representatives from Turkish associations were in the hall, as well as a number of Armenians including Charles Aznavour, who is of Armenian heritage and famous French philosopher Bernard-Henry Levy.
As Serge Lagauche presented the draft proposal, rapporteur Jean-Jacques Hyest stated that it went against freedom of expression and therefore also the French constitution. Reminding that there is no agreement or court ruling regarding the incidents that transpired in 1915, Hyest requested that the bill be voted against.
Minister of Justice Michel Mercier also announced that as the government, they were also against the bill proposal. Mercier also warned that this proposal went against the European Human Rights Agreement's item on freedom of expression.