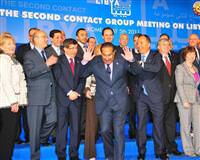 Turkey's Foreign Minister has called for a ceasefire in Libya within seven days, his Italian counterpart said during a meeting of the NATO-backed coalition against Libyan leader Muammar Gaddafi.

Frattini said the United Nations had confirmed its objective for a ceasefire as soon as possible, and that Turkey's Foreign Minister Ahmet Davutoğlu had suggested the target.
"Minister Davutoğlu, from Turkey...spoke of a very ambitious objective, a ceasefire within seven days," Frattini said.
He said there was a willingness in the anti-Gaddafi coalition to step up the pace of military action to meet what he called the ambitious goal.
Turkey's Foreign Minister Ahmet Davutoğlu clarified remarks attributed to him on Thursday, saying a Libyan ceasefire plan Ankara had proposed included a seven-day implementation period before a political transition phase could begin.
"Turkey has been working on a roadmap consulting our allies and parties in Libya," he told reporters
"What we mean is ceasing all fire, withdrawing all armies from cities, full humanitarian access. What we are seeing is that all these objectives should be achieved (within seven days). To make a genuine ceasefire we have to put these mechanisms in place." Earlier, Italian Foreign Minister Franco Frattini told a news conference following a meeting of ministers from the NATO-backed coalition against Gaddafi that Turkey had proposed a ceasefire within seven days.
International allies in the coalition against Libyan leader Muammar Gaddafi will hold their next meetings in the United Arab Emirates (UAE) and Turkey, the UAE foreign minister said on Thursday.
Sheikh Abdullah bin Zayed al-Nahayan told reporters in Rome after the third meeting of the so-called "Contact Group" on Libya that the next meeting would be in his country, followed by one in Turkey in the second half of June. He said the precise dates of the meetings had not yet been set.