A second September 11th would have hit trains 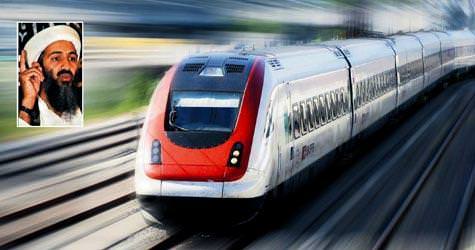 Al Qaeda has verified the death of leader Osama Bin Laden. While visitors are flocking to the home in Pakistan where Laden was killed, in the United States sales of t-shirts depicting the operation are hitting a high.

Documents recovered from the home Laden was killed have revealed a spine tingling finding: Al Qaeda was planning to smear the United States with blood once again, and on the tenth anniversary of September 11th! Part of the documents recovered contained notes penned by bin Laden himself.
IT MAY HAVE BEEN NEW YORK
Five computers, ten computers' memory storage and over 100 CD's and DVD's have revealed Al Qaeda had plans to stage another attack. According to news from CNN, in February of 2010, Al Qaeda members made plans to set up obstacles to derail trains on railways above bridges or valleys. The event was to transpire on September 11th, July 4th designated as an alternate date. According to the news, a warning note sent to security officials did not designate where this event would take place, however New York or Chicago are being considered as highly probable locations.