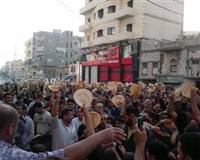 The attack came hours after the United States, reacting to the death of 27 protesters on Friday, threatened to take new steps against Syria's rulers unless they stopped killing and harassing their people.

The army entered the coastal city of Banias from three directions, advancing into Sunni districts but not Alawite neighborhoods, the campaigner said.

Most communication with Banias has been cut but the campaigner was able to contact several residents, he said.

"Residents are reporting the sound of heavy gunfire and seeing Syrian navy boats off the Banias coast. Sunni and mixed neighborhoods are totally besieged now," said the campaigner, who did not want to be identified.

Banias has seen some of the most persistent demonstrations since an uprising erupted in the southern city of Deraa seven weeks ago demanding political freedom and an end to corruption.

Authorities said the coastal city was a "center of Salafist terrorism" and said armed groups had killed soldiers near the city. Salafism is an ultra-conservative brand Sunni Islam.

Civic leaders in Banias issued a statement denying the accusation and saying the authorities were trying to spread fear among Alawites, who occupy most senior positions in the army and security apparatus.

Assad said the protesters were part of a foreign conspiracy to cause sectarian strife.

His father Hafez al-Assad used similar language when he crushed Islamist and secular challenges to his rule in the 1980s, culminating in the violent suppression of an uprising in the city of Hama in which 30,000 people were killed.

A protest leader said earlier this week that Syrian forces and gunmen loyal to Assad had moved on Tuesday into areas of central Banias, with a population of 50,000, that had been under the control of pro-democracy demonstrators for weeks.

Mostly Sunni districts of Banias have been under the control of protesters since Assad loyalists, known as "al-shabbiha," fired at residents from speeding cars on April 10, after a large demonstration that demanded the "overthrow of the regime."

Six civilians were killed that day, according to residents and human rights campaigners.

"I regret to say that the propaganda that Assad is spreading that the Alawites will not survive if he is toppled is receiving an audience among our Alawite neighbors, although the demonstrations have been for freedom and unity, regardless of sect," Shurgri said.

International criticism has mounted against Assad, who is trying to maintain his family's four-decade grip on power in the country of 20 million.

European Union governments agreed on Friday to impose asset freezes and travel restrictions on up to 14 Syrian officials and to impose sanctions in response to Assad's violent crackdown.

The United States imposed sanctions of its own last week against some figures in the Syrian government. On Friday it threatened to step up the pressure to try to stop the violence which rights campaigners say has killed more than 580 people.

Tens of thousands of protesters demonstrated after Friday prayers in cities across Syria, from Banias on the Mediterranean coast to Qamishly in the Kurdish east, demanding an end to Assad's autocratic rule.

Friday's bloodiest confrontation was in the city of Homs where 15 protesters were killed, activist Ammar Qurabi said.

State television said an army officer and four police were killed in Homs by a "criminal gang," though another activist, Wissam Tarif, said witnesses told him nine soldiers defected in Homs to the protesters and may have clashed with other troops.

Four protesters were killed by security forces in Deir al-Zor, said a local tribal leader, the first deaths reported from the region which produces most of Syria's 380,000 barrels per day of oil in seven weeks of unrest.

A Western diplomat said 7,000 people had been arrested since the demonstrations broke out on March 18 in Deraa, where an ultra-loyalist division led by Assad's brother Maher shelled and machine-gunned the old quarter last Saturday, residents said.

The United States condemned the assault as "barbaric."