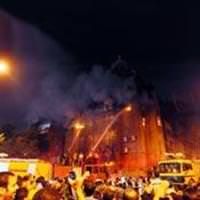 Egypt's military-led government faced a major challenge after two days of clashes between Muslims and Christians in which state media reported 12 people died and 238 were injured.

Egypt's worst sectarian strife since 13 people died on March 9 when a church was burned was triggered by rumors Christians had abducted a woman who converted to Islam.

The army said that 190 people would be tried in military courts over the violence that erupted on Saturday.

On Sunday, hundreds of young Christian men ran through central Cairo toward the main state television building calling for the removal of Field Marshal Mohamed Hussein Tantawi, who leads the military council ruling Egypt since the overthrow of President Hosni Mubarak in February.

A crowd of Muslim men met them and some sought to calm the Christians' anger but fights broke out and the two groups pelted each other with stones. The state news agency MENA said 42 people were injured in the fighting.

The clashes later died down, but hundreds of protesters remained in the area late into the night.

Authorities stationed military vehicles near churches in the Cairo suburb of Imbaba on Sunday after a dozen people died in clashes between Christians and Muslims there the previous day, witnesses said.

Injured Muslims and Christians being treated in hospital showed reporters small holes that looked like shotgun wounds. State media said on Sunday 12 died and 238 were wounded. Medical sources said 65 of the injured were shot.

Prime Minister Essam Sharaf canceled a tour of Gulf Arab states to chair a cabinet meeting where the government decided to deploy heavier security near religious sites and toughen laws criminalizing attacks on places of worship.

"Gatherings around places of worship will be banned to protect their sanctity and ensure the security of residents and prevent sectarian strife," Justice Minister Mohamed el-Guindy said in a statement read on state television.

Authorities cordoned off streets near Imbaba's Saint Mina church, where about 500 conservative Salafist Muslims massed on Saturday to call on Christians to hand over a woman they said was being held there.

Gunfire broke out as more people converged on the church and both sides traded firebombs and stones, witnesses said. Soldiers and police fired shots in the air and used teargas to separate the sides but stone-throwing went on into the night.

A power cut plunged the neighborhood into darkness, making it harder for the security forces to quell the violence.

A nearby church, Saint Mary's, was badly burned. One witness said thugs started the fire at Saint Mary's and that the Salafists had tried to stop them.

"The Brotherhood, and Islam before them, condemn all means of terrorism," the Brotherhood's leader Mohammed Badie was quoted as saying by MENA. "There is nothing like this criminality present in Islam."

Egypt's highest religious authority, Al-Azhar, held an emergency meeting to discuss the clashes, and the Grand Mufti called for a conference of national reconciliation.

"I think the army is in a state of confusion," Gamal Eid, a prominent author and human rights activist, said. "It is afraid to take serious action against extremists so as not to be accused of suppressing these movements."

"They want to gain the sympathy of the Egyptian Muslims and they think that by doing what they are doing, they would reach this goal and gain political ground," Naggar said.

Sectarian strife often flares in Egypt over conversions, family disputes and the construction of churches. Muslims and Christians made demonstrations of unity during the protests that overthrew Mubarak, but interfaith tensions have grown.

Some Christians said security forces had been too slow to disperse the crowd in front of Saint Mina and looked on as tension got out of hand. Christians make up about 10 percent of Egypt's 80 million population.

Secular Egyptians have also voiced unease at what they see as a lax approach to Salafists violence since Mubarak's ouster.

Hundreds of protesters also gathered and attempted to block roads in the northern port city of Alexandria as they called for religious unity and punishment for those who took part in Saturday's violence.

"They must strike with an iron fist against anyone who has killed an Egyptian, regardless of their religion or political orientation," Christian college student Mina Gergis, 22, said.