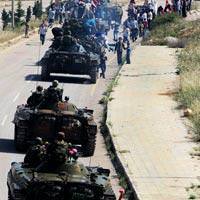 Syrian tanks and troops stormed three districts of the central city of Homs and swept into several southern towns on Sunday, residents said, in a campaign to crush an uprising against autocratic Baathist rule.

The official state news agency said an 'armed gang', a term used by authorities to characterize those involved in rebellion against President Bashar al-Assad, had ambushed a bus near Homs and shot dead 10 civilian workers returning from Lebanon.

In the first incursion into residential areas in Homs, Syria's third city, machinegun fire and shelling was heard across the city of one million people, residents told Reuters.

A witness said security forces killed at least two unarmed demonstrators on Sunday when they opened fire on a night rally in the eastern city of Deir al-Zor.

At least one civilian, a 12-year-old child, was killed when tanks and troops charged into the Bab Sebaa, Bab Amro and Tal al-Sour districts of Homs overnight, according to the Syrian Observatory for Human Rights.

"The areas have been under total siege since yesterday. There is a total blackout on the numbers of dead and injured, Telecommunications and electricity are repeatedly being cut with the districts," the Observatory said in a statement.

A human rights campaigner in Homs said by telephone: "There are reports of (more) deaths but they cannot be confirmed. I cannot get out of my house. Security forces are everywhere."

A man was killed when security forces smashed their way into his home in the southern town of Tafas, a rights campaigner in the Hauran Plain region said. Scores were arrested in Tafas.

"They come with lists of hundreds of wanted names and besiege whole towns," he said.

The pro-democracy upheaval that began in Deraa on March 18, inspired by similar revolts across the Arab world, spread on Friday across Hauran, an agricultural belt bordering Jordan to the south and the Israeli-occupied Golan Heights to the west.

Protesters are demanding political freedoms, an end to corruption and the departure of President Assad, who has said they are part of a foreign conspiracy to cause sectarian strife -- an accusation the demonstrators dismiss.

Syrian authorities have blamed the nearly two months of violence on "armed terrorist groups" they say are operating in Deraa, Banias, Homs and other parts of the country, which has been ruled by the Assad family for the last 41 years.

Assad's father, Hafez, who was president for 30 years until his death in 2000, brutally suppressed an armed Islamist uprising in 1982 in which around 30,000 people were killed.

A human rights group says security forces have killed at least 800 civilians in the seven-week-old uprising.

Tanks moved into the towns of Tafas, Dael and Ibtaa in the Hauran Plain on Sunday. Residents said they heard gunfire and that army and forces broke into houses to arrest youths. The three towns have a combined population of around 80,000 people.

The army intensified its presence in Hauran after partially pulling out of Deraa this week and redeploying in nearby rural communities, witnesses said.

"We knew they would not forgive us for our solidarity with Deraa. They are also targeting Tafas because it is harboring lots of the youth who escaped the attack on Deraa," one of the residents of Tafas said.

Tens of thousands of villagers from Hauran converged on Tafas on Friday and chanted slogans demanding Assad's overthrow.

Prevented from entering Deraa, still encircled by tanks after nearly two weeks, they staged one of the largest demonstrations in Hauran despite the heavy security presence in the plain, witnesses said.

The Syrian Observatory for Human Rights said at least 200 more people had been arrested in Banias by soldiers in raids on houses in the city, including a 10-year-old child.

Among them was a doctor, Hanan Iman, who was detained while she was treating an injured man in a street, the Observatory said, adding that dozens of women were arrested in Marqab, a village 3 km (two miles) from Banias.

A Western diplomat has said 7,000 people in all had been arrested in security sweeps since mid-March.

Until the uprising began, Assad -- from the minority Shi'ite Alawite sect -- had been emerging from Western isolation after defying the United States over Iraq and reinforcing an anti-Israel bloc with Iran, increasing Syrian Sunni concerns.

The attack on Banias this weekend raised sectarian tension.

The West had been working on rehabilitating Assad on the international stage over the last three years to wean Damascus off its Iran alliance and encourage peace moves with Israel, but his crackdown on dissent has put that rapprochement on hold.

The United States, reacting to the death of 27 protesters on Friday, threatened to take new steps against Syria's Alawite rulers. Washington imposed more targeted sanctions on Syrian officials but excluded Assad himself.