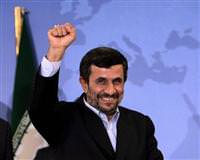 Iran will hold talks with major powers in Turkey over its disputed nuclear program, President Mahmoud Ahmadinejad said on Monday, after earlier discussions failed to resolve the row.

"I hope that this important issue will reach its final result in the (next) Istanbul talks," Ahmadinejad told a news conference in Istanbul, broadcast live on Iranian state television, without giving a date.

Iran's nuclear talks with major powers in January failed after the Islamic state refused to halt its uranium enrichment, as demanded by the United Nations Security Council.

The United States and its European allies fear Iran is trying to build atomic bombs under cover of its nuclear program. Tehran denies it, saying it needs nuclear technology to generate electricity.

After talks with his European Union counterpart in Geneva in February, Iranian Foreign Minister Ali Akbar Salehi said he hoped there would be further meetings, but no date was set.

"Soon the response to Mrs. Ashton's letter will be sent by relevant Iranian officials," Ahmadinejad said.

"We have always been in favor of talks. Iran is ready today to hold talks based on justice and mutual respect," he added.

Washington said it could not confirm Ahmadinejad's announcement.

"Obviously it has been some time since our last p5+1 talks. We've been quite clear on what we are looking for. But we do support this dialogue, and as we've said often there's two tracks here and the door does remain open," State Department spokesman Mark Toner told a news briefing.

After the last round of talks, which also took place in Istanbul, Ashton called the nuclear discussions with Iran disappointing, saying no further meetings were scheduled.

Iran has been hit by international sanctions for refusing to halt its sensitive nuclear activities. Ahmadinejad said Iran had no intention of stopping its nuclear work.

"Our nuclear activities are legal ... and under the supervision of the International Atomic Energy Agency," he said in Istanbul, where he attended the conference of "least-developed countries."