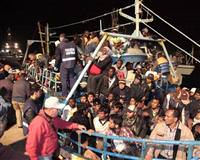 NATO on Monday denied a report that alliance units failed to help a drifting boat carrying African migrants from Libya, leading to the deaths of 62 people from thirst and hunger.

France also denied that its aircraft carrier Charles de Gaulle was involved in the incident reported in the Guardian.

The British newspaper said the boat carrying 72 people, including several women, children and political refugees, ran into trouble after leaving Tripoli for the Italian island of Lampedusa 180 miles to the northwest on March 25.

It said that despite the alarm being raised with the Italian coastguard and the boat making contact with a military helicopter and a NATO warship, no rescue effort was attempted.

All but 10 of those who had been on board died after their vessel was left to drift in open waters for 16 days, it said.

NATO spokeswoman Carmen Romero said only one aircraft carrier was under NATO command during the period, the Italian ship Garibaldi, and that was operating 100 nautical miles out to sea.

"Therefore any claims that a NATO aircraft carrier spotted then ignored the vessel in distress are wrong," she said.

Romero said that on the night of March 26-27, several NATO units were involved in rescuing more than 500 people from two vessels carrying migrants in incidents in an area about 50 nautical miles north-northeast of Tripoli.

"The NATO units involved saw and heard no trace of any other vessels in the area where safety of life at sea was threatened.

"NATO vessels are fully aware of their responsibilities with regard to international maritime law on safety of lives at sea."

The Guardian quoted survivors and other people who were in contact with passengers on the vessel.

The paper said it had concluded after extensive inquiries that the "NATO warship" it referred to was likely to have been the Charles de Gaulle, which was operating in the Mediterranean.

The French ship has been taking part in the international operation off Libya, but not under NATO command.

Thierry Burkhard, spokesman for the chief of staff of the French armed forces, denied the French navy had failed to help.

"The Charles de Gaulle was never at any moment in contact with this type of boat, nor (was) any other French vessel, due to its position," he said.

The Guardian said the migrant vessel ran into trouble and began losing fuel 18 hours out of from Tripoli. It used a satellite phone to call Father Moses Zerai, an Eritrean priest in Rome who runs a refugee rights organization, Habeshia, who contacted the Italian coastguard.

The paper said the boat's location was narrowed down to about 60 miles off Tripoli, and the coastguard assured Zerai the alarm had been raised.

Zerai was not immediately available to comment on Monday.

A spokesman for the Italian coastguard said the location of the ship was pinpointed with the help of satellite telephone providers and heading toward Maltese waters. An alarm was sent from its Rome headquarters to all ships, civilian and military, in the area.

"If we had been in the area, we certainly would have intervened," said Lt. Massimo Maccheroni. He said that under maritime law, the coastguard cannot operate in other country's waters without permission.

The newspaper said a military helicopter marked with the word "army" soon appeared above the boat. The pilots, who were wearing military uniforms, lowered bottles of water and packets of biscuits and gestured to passengers that they should hold their position until a rescue boat came to help.

The helicopter flew off, but no rescue boat arrived.

The Guardian said that on March 29 or 30, the boat drifted near to "a NATO aircraft carrier," and according to survivors, two jets took off from the ship and flew low over the boat while migrants stood on deck holding the two babies aloft.

However, the newspaper said, "from that point on, no help was forthcoming" and one by one the migrants began dying of thirst and starvation.

Dozens of immigrants from north Africa have died attempting to reach Italian shores. On April 6, a boat carrying 200 people sank south of Sicily. In that case, Italian ships answered a distress signal and managed to save 50 people in Maltese waters.

The Guardian said that when the boat with the 72 migrants on board washed up on a beach near the Libyan town of Zlitan near Misrata on April 10, only 11 aboard were still alive, one of whom died almost immediately on reaching land.

Those aboard included 47 Ethiopians, seven Nigerians, seven Eritreans, six Ghanaians and five Sudanese. Twenty were women and two were small children, one of whom was one year old.