'Turkey is alone in the struggle against terrorism’ 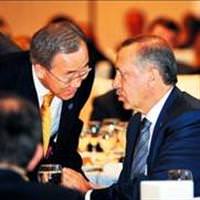 During an address to world leaders in Istanbul, Erdoğan expressed that Turkey has been left alone in the struggle against terrorism and stated, “There are still countries that provide support to a terrorist organization.”

Prime Minister Recep Tayyip Erdoğan hosted a lunch at the Lütfi Kırdar International Congress Center for the fourth Least Developed Nations Conference, which is held every ten years and this year in Istanbul.
During an address at the meal, Erdoğan stated that Turkey has been left on its own in the struggle against terrorism. Erdoğan went on to deliver the following messages:
"Those who perceive countries based on resources pose a signficiant safety crisis for the citizens of said countries. To perceive democracy or freedoms as relevant to themselves and early or unnecessary for others harms the concept of justice throughout the world.
While Turkey continues to remain determined in their struggle against a terrorist organization, I sadly have to say, that it has been left on its own. We know, that even today, there are countries that do not support Turkey's struggle against terrorism, they do not act intent in their own countries and some even still offer support to these terrorist organizations.
(In regards to the US freezing the PKK's assets) These were certified, well-known leaders. Now, how they make their money, and how they pose a threat when it comes to human and narcotics trafficking is evident. They do not only harm in terms of terrorism, but at the same time they are entering into people's blood through drugs. They pose a threat to health.
It is extremely significant that terrorist attacks in Turkey are overlooked and not responded to. Unfortunately, there is a prejudice against the Islamic world and Muslims as a result of certain terrorists or terrorist organizations. To treat individuals named Hasan, Ahmet, Mustafa and other similar names as potential terrorists is just as dangerous as racism or anti-Semitism.