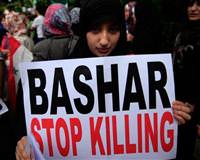 Army tanks shelled a residential district in Homs on Wednesday, said a rights campaigner in Syria's third city which has emerged as the most populous center of defiance against President Bashar al-Assad's rule.

"Homs is shaking with the sound of explosions from tank shelling and heavy machineguns in the Bab Amro neighborhood," said Najati Tayara.

Assad initially responded to the unrest, the most serious challenge to his 11-year grip on power, with promises of reform. He granted citizenship to stateless Kurds and last month lifted a 48-year state of emergency.

But he also sent the army to crush dissent, in Deraa where demonstrations first erupted on March 18 and then to other cities, making clear he would not risk losing the tight control his family has held over Syria for the past 41 years.

A powerful cousin of the president said the Assad family was not going to capitulate. "We will sit here. We call it a fight until the end...They should know when we suffer, we will not suffer alone," Rami Makhlouf told the New York Times.

Makhlouf, a tycoon in his early 40s who owns several monopolies, and his brother, a secret police chief, have been under specific U.S. sanctions since 2007 for corruption.

Rights campaigner Suhair al-Atassi said a demonstration broke out on Tuesday in Homs, despite a heavy security clampdown, after tanks stormed several neighborhoods on Sunday and three civilians were killed.

"This regime is playing a losing card by sending tanks into cities and besieging them. Syrians have seen the blood of their compatriots spilled. They will never return to being non-persons," she told Reuters.

Demonstrators have shouted the name of Makhlouf as a symbol of graft in a country that has been facing severe water shortage and unemployment ranging from government estimates of 10 percent to independent estimates of 25 percent.

Makhlouf maintains he is a businessman whose companies provide jobs for thousands of Syrians.

Most foreign journalists have been banned from Syria. Presidential adviser Bouthaina Shaaban told a New York Times correspondent allowed into the country for a few hours that "now we've passed the most dangerous moment...I hope we are witnessing the end of the story."

Water, telecommunications and electricity had been restored, but tanks remained in major streets, the Syrian Observatory for Human Rights said on Tuesday. Two hundred people, including pro-democracy protest leaders were still in jail, it said.

"Scores of those released were severely beaten and subjected to insults. A tank deployed in the square where demonstrations were being held," Observatory director Rami Abdelrahman said.

Human rights campaigners said at least six civilians, including four women, where killed in raids on Sunni neighborhoods and in an attack on an all-women demonstration just outside Banias on Saturday.

Until the uprising began, Assad -- from the minority Shi'ite Alawite sect -- had been emerging from Western isolation after defying the United States over Iraq and reinforcing an anti-Israel bloc with Iran, increasing Syrian Sunni concerns.

Demonstrators in Banias had raised posters of Turkish Prime Minister Tayyip Erdogan, who has had close ties to Assad, but disputed the official Syrian account of the violence.

Erdogan said more than 1,000 civilians had died and he did not want to see a repeat of the 1982 Hama violence or the 1988 gassing of Iraqi Kurds in Halabja, when 5,000 people died.

Officials have blamed most of the violence on "armed terrorist groups," backed by Islamists and foreign agitators, and say about 100 soldiers and police have been killed.

In southern Syria, four civilians in the southern town of Tafas were killed as security forces widened a campaign of arrests, a human rights campaigner in the region said, adding 300 people had been detained since tanks entered Tafas on Saturday.