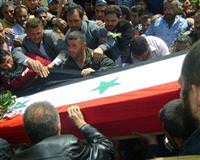 Assad, fighting the most serious challenge to his 11-year rule, has sent troops and tanks into several cities in the last two weeks to try and end protests inspired by Arab revolts which toppled leaders in Egypt and Tunisia.

Wednesday was one of the bloodiest days apart from the main Friday protest days, when thousands use the platform of weekly Muslim prayers to demonstrate. Most of the violence occurred in the southern Deraa province, where unrest erupted on March 18.

Protesters, who first called for reforms and greater freedoms, have hardened their demands with many chanting for the overthrow of the president who inherited the authoritarian powers of his father Hafez al-Assad, who died in 2000.

Ammar Qurabi, head of the National Organisation for Human Rights in Syria, said 13 people were killed in the town of Harra, about 60 km (40 miles) northwest of Deraa city.

Most were killed when tanks shelled four houses. Two people -- a child and a nurse -- died in gunfire, he said.

Tanks also shelled a residential district in Syria's third largest city Homs and at least five people were killed, a rights campaigner in the city said. A sixth person was killed by a sniper shot to the head as he stood in front of his house.

There was no immediate comment from Syrian authorities, who have banned most international media from Syria, making it difficult to verify accounts of events.

In Syria's second city Aleppo near the border with Turkey, security forces used batons to disperse a pro-democracy demonstration by 2,000 students on Wednesday at a university campus, a witness said.

Another resident of Aleppo said secret police had closed the main road leading from the centre of the city to the campus in the western Furqan district.

The violence has been denounced in the West, where countries have imposed limited sanctions on Syrian leaders but stopped short of calling for Assad to step down, as they have in the case of Libya's Muammar Gaddafi.

Syria withdrew its candidacy on Wednesday for a spot on the top U.N. human rights body. Its ambassador to the United Nations, Bashar Ja-afari, said Damascus was "reconsidering our priorities" and would try again in 2013.

U.S. Ambassador Susan Rice said Syria's bid was blocked by Asian nations with the "good sense" to withdraw support from a country "in the process of killing its own people on the streets, arresting thousands and terrorising a population that is seeking to express itself through largely peaceful means."

They said thousands of pro-democracy Syrians had been arrested and beaten in the last two months, including scores on Wednesday in Homs and in the coastal city of Banias.

Assad adviser Bouthaina Shaaban said this week authorities had "passed the most dangerous moment" of the protest and that she had met a group of veteran opposition figures, promising them a freer press, political parties and an election law.

Assad has responded to the unrest with promises of reform, lifting a 48-year-old state of emergency. The state news agency SANA said on Wednesday a government committee had been formed to draft a new election law, but gave no details.

Activists say the reforms are cosmetic, and the crackdown on demonstrations shows Assad will not risk loosening the grip his family has held for 41 years. Rights groups say at least 650 civilians have been killed in the crackdown.

Long a foe of Washington and part of an anti-Israel bloc with Iran, Assad had nonetheless been gingerly emerging from Western isolation before the unrest.

In Banias, protesters held up pictures of Turkish Prime Minister Tayyip Erdogan to salute him for his stand against what they perceive as Assad's iron-fist policy towards opposition.

Erdogan maintains close trade and diplomatic ties with Assad but has disputed the official Damascus account of the violence.

Syrian officials have blamed most of the violence on "armed terrorist groups," backed by Islamists and foreign agitators, and say about 100 soldiers and police have been killed.

Erdogan said more than 1,000 civilians had died in Syria's upheaval. He said he did not want to see a repeat of the 1982 bloodshed in Hama, where Assad's father crushed an Islamist uprising, or the 1988 gassing of Kurds in the Iraqi town of Halabja during the dictatorship of Saddam Hussein.