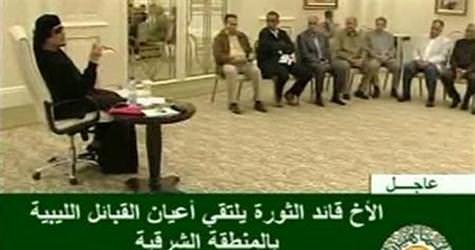 Libyan state television carried brief audio tape remarks it said were by Muammar Gaddafi in which he taunted NATO as a cowardly crusader whose bombs could not kill him.

The comments were aired on Friday after Italy's foreign minister said Gaddafi had very likely left the Libyan capital and probably been wounded by NATO air strikes, an account Tripoli dismissed.

"I tell the cowardly crusader (NATO) that I live in a place they cannot reach and where you cannot kill me," said the man on the audio tape, whose voice sounded like Gaddafi's.

"Even if you kill the body you will not be able to kill the soul that lives in the hearts of millions," he said, adding he had received a "massive" number of calls after a NATO air strike on his Bab al-Aziziyah compound in Tripoli on Thursday.

Government spokesman Mussa Ibrahim said Gaddafi was unharmed and in Tripoli, leading the country and in good spirits.

NATO allies including the United States, Britain and France are bombing Libya as part of a U.N. mandate to protect civilians. They say they will not stop until the downfall of the Libyan leader, who took power in a coup 41 years ago.

Rebels have mounted a three-month-old uprising against Gaddafi's rule and control Benghazi and the oil-producing east of Libya. Thousands of people have been killed in the fighting.

A NATO air strike on the eastern Libyan city of Brega on Friday that the Libyan government said killed 11 people and wounded 45, was directed against a "command and control bunker," the alliance said in a statement in Brussels.

"We are aware of allegations of civilian casualties in connection to this strike, and although we cannot independently confirm the validity of the claim, we regret any loss of life by innocent civilians when they occur," said NATO.

It said the building struck had been clearly identified as a command-and-control center.

President Barack Obama gave the rebels his stamp of approval on Friday by having rebel leaders visit the White House for talks.

U.S. recognition of the council as the representative of the Libyan people was under review, he said.

Tripoli says the rebels are criminals and supporters of al Qaeda and calls NATO strikes acts of colonial aggression.

The conflict has caused a diplomatic rupture between Tripoli and Western powers and their allies.

The war in Libya has reached a virtual stalemate and fighting of late has focused on the port city of Misrata in the west where rebels are clinging on in the face of a government siege. Rebels took control of Misrata airport this week.

A doctor, who gave his name as Khalid, said on Friday missile strikes by Gaddafi's forces stationed in positions around the city had killed 10 people and wounded 20.

Ibrahim said the city was in Tripoli's hands and that rebels were fleeing.

No independent verification of the accounts about Misrata were available.