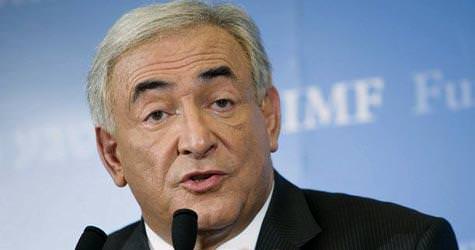 IMF chief Dominique Strauss-Kahn was charged on Sunday with trying to rape a New York hotel maid in a scandal that appeared to wreck his hopes of becoming France's next president.

A handcuffed and drained Strauss-Kahn appeared before reporters for the first time on Sunday night when two police detectives escorted him from a police station to a gray, four-door sedan. Police said he would be taken to the booking station at Manhattan Criminal Court.

His hair neatly parted, Strauss-Kahn wore a black overcoat, blue dress shirt and black dress slacks. He kept his eyes straight ahead, avoiding looking at the battery of cameras that had staked out the site for hours.

The sexual assault charges throw the IMF into turmoil just as it is trying to ease an escalating euro zone debt crisis, and they turn France's presidential election campaign upside down when polls had made Strauss-Kahn a clear front runner.

The charismatic 62-year-old, who led the International Monetary Fund through the 2007-09 global financial meltdown and has been central in galvanizing Europe to tackle its debt woes, for long had the reputation of a womanizer. But the charges he faces are in another realm.

A maid, 32, said he emerged naked from the bathroom and sexually assaulted her inside his $3,000-a-night suite at the Sofitel hotel near New York's Times Square on Saturday afternoon.

He would plead not guilty, his lawyers said.

Strauss-Kahn's first court appearance before a state judge had been expected on Sunday night but was delayed after investigators asked a judge for a warrant to search his body for scratches, a police spokesman said.

The defendant agreed to a medical examination voluntarily, one of his defense lawyers said. It was unclear where or when the exam would take place.

"Our client willingly consented to a scientific and forensic examination tonight ... at the request of the government and in light of the hour we have agreed to postpone the arraignment until tomorrow morning," said lawyer William Taylor. No specific time was given for the court appearance.

Police say he fled the hotel after the alleged assault and a few hours later they pulled him from his first-class seat on an Air France plane minutes before it was to take off for Paris.

Strauss-Kahn was charged with a criminal sexual act, unlawful imprisonment and attempted rape, moving him from luxurious hotel suite and a glittering public career to scandal and a bare holding cell in New York's tough Harlem neighborhood in the space of a few hours.

The contrast could barely have been more dramatic. At the Sofitel, Strauss-Kahn's suite had a conference room, living room, foyer, spacious marble bathroom and a bedroom with a sumptuous king-sized bed and feather and down duvet.

While he was locked up in Harlem on Sunday, the woman identified him from a police lineup that included five other men, a police spokesman said.

Police say Strauss-Kahn does not have diplomatic immunity from the charges, which if proven could carry a prison sentence of 15 to 20 years. They have collected DNA evidence from the hotel suite, The New York Times reported.

The IMF said Strauss-Kahn had been in New York on private business. He has hired New York lawyer Benjamin Brafman, a seasoned defense attorney who has successfully represented several celebrities, to lead his defense team.

"I do not believe for a single second the accusations leveled against my husband," she said in a statement.

The IMF tried to fill its leadership vacuum by naming No. 2 official, John Lipsky, as acting managing director. The charges against Strauss-Kahn are a huge embarrassment for an institution that oversees the global economic system and has authorized hundreds of billions of dollars of loans to troubled countries as well as playing a major role in the euro-zone debt crisis.

The euro fell to a six-week low against the dollar and a two-month trough against the Japanese yen when markets opened in Asia on Monday as the news added uncertainty to aid for Greece and other indebted euro zone countries.

He had not yet declared his candidacy but Strauss-Kahn was widely expected to run for the Socialist Party and early opinion polls showed him with a big lead over the conservative incumbent, Nicolas Sarkozy, who is seeking a second term at the election next April.

France's government as well as Strauss-Kahn's political allies and rivals called for caution and respect for the presumption of innocence, but his presidential ambitions appeared to be dead unless the case against him quickly unravels and he is shown to be innocent.

"All this is completely astounding, immensely troubling and distressing. If the facts prove true ... it's something degrading for all women. It's terrible for the image of France," said Francois Bayrou, a centrist opponent.

Christine Boutin, president of the Christian Democrat Party, suggested Strauss-Kahn may have been set up.

"I think it's very likely a trap was set for Dominique Strauss-Kahn and he fell into it," she told France's BFM television. "It's a political bomb for domestic politics."

French voters are famously tolerant of political leaders' extramarital affairs. The allegations against Strauss-Kahn are entirely different, and much more serious.

If they are proven, Strauss-Kahn's fall from power in a scandal would be one of the most dramatic of any high-profile international figure in decades.

Many politicians have fallen after being caught in extramarital affairs and others have survived them, including former U.S. President Bill Clinton as well as former French President Francois Mitterrand.

Rarely have senior figures faced brutal assault charges like those filed against Strauss-Kahn.

With Strauss-Kahn in the dock, the IMF also now faces many questions of its own, because his character had been questioned before.

In 2008, Strauss-Kahn apologized for "an error of judgment" after an affair with a female IMF economist who was his subordinate.

The Fund's board of member countries warned him against further improper conduct, but cleared him of harassment and abuse of power and kept him in his job. It will now face new scrutiny over whether that response was too weak, especially as there have been persistent rumors about Strauss-Kahn making sexual advances to women.

An economics professor and former French finance minister, Strauss-Kahn took over the IMF in November 2007 for a five-year term, and won praise for helping galvanize leaders to inject billions of dollars into the world economy during the global financial crisis.

He introduced sweeping changes to ensure vulnerable countries swamped by the crisis had access to emergency loans, and others to give major emerging market countries such as China, India and Brazil greater voting powers in the IMF.

Witty, multilingual, a skilled public speaker and sharp back-room negotiator, Strauss-Kahn also weighed into thornier issues by urging China to let its currency rise in a dispute with the United States.

A crisis of leadership at the Fund now will especially worry European nations given Strauss-Kahn's pivotal role in brokering bailouts for Iceland, Hungary, Greece, Ireland and Portugal.

Strauss-Kahn had been due to meet German Chancellor Angela Merkel on Sunday and join euro zone finance ministers on Monday to discuss the bloc's debt crisis and how to handle Greece, which is struggling to meet the terms of a 110 billion euro European Union/IMF bailout last year.

"This might definitely cause some delays in the short term," a Greek official told Reuters on condition of anonymity.

Strauss-Kahn's lawyers moved quickly to cast doubts on the allegations against him.

The maid who accused Strauss-Kahn told police he attacked her when she went in to clean his suite.

"She told detectives he came out of the bathroom naked, ran down a hallway to the foyer where she was, pulled her into a bedroom and began to sexually assault her, according to her account," New York police spokesman Paul Browne said.

"She pulled away from him and he dragged her down a hallway into the bathroom where he engaged in a criminal sexual act, according to her account to detectives. He tried to lock her into the hotel room."

The woman, who has not been named, was treated in hospital for minor injuries, Browne said. She has worked at the hotel for three years and the property's manager said on Sunday she has been a "completely satisfactory" employee in her work and her behavior.