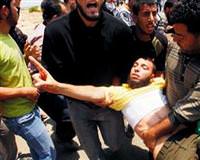 Israeli troops shot Palestinian protesters who surged toward its frontiers with Syria, Lebanon and Gaza on Sunday, killing at least 14 people on the day Palestinians mourn the establishment of Israel in 1948.

In the deadliest such confrontation in years of anniversary clashes usually confined to the West Bank and Gaza, Israeli forces opened fire in three separate border locations to prevent crowds of demonstrators from crossing frontier lines.

The new challenge to Israel came from the borders of Lebanon, Syria, Jordan and Gaza -- all home to hundreds of thousands of Palestinians who fled or were driven out in 1948.

Combined with a public relations disaster last year over the killing of pro-Palestinian activists in a Gaza aid flotilla and a determined Palestinian diplomatic drive to win U.N. recognition of statehood in September this year, the bloody border protests raised the stakes further for Israel.

Israel's leaders condemned the incidents as provocations inspired by Iran, to exploit Palestinian nationalist feeling fueled by the popular revolts of the "Arab Spring," and to draw attention from major internal unrest in Syria, Iran's ally.

Israeli Prime Minister Benjamin Netanyahu said he hoped the confrontations would not escalate.

"We hope the calm and quiet will quickly return. But let nobody be misled: we are determined to defend our borders and sovereignty," Netanyahu said.

Palestinian President Mahmoud Abbas, whose Fatah movement holds sway in the Israeli occupied West Bank and is ready to negotiate peace with Israel, said in a televised address that those killed were martyrs to the Palestinian cause.

"Their precious blood will not be wasted. It was spilled for the sake of our nation's freedom," Abbas said.

But Islamist Hamas, which rules the Gaza Strip and which last month sealed a surprise reconciliation pact with its bitter rival Fatah, issued a warning that Palestinians would accept nothing less than return to all lands lost in 1948.

Spokesman Taher Al-Nono praised the "crowds we have seen in Palestine, Egypt, Syria, and Lebanon" as evidence of "imminent victory and return to the original homes as promised by God."

In an apparent contradiction of suggestions that Hamas might ditch its rejection of Israel's right to exist, he said there was no alternative to recovering all land lost in 1948.

Israeli security forces had been on alert for violence on Sunday, the day Palestinians mourn the "Nakba," or catastrophe, of Israel's founding in a 1948 war, when hundreds of thousands of their brethren fled or were forced to leave their homes.

A call had gone out on Facebook urging Palestinians to demonstrate on Israel's borders.

Lebanon's army said 10 Palestinians died as Israeli forces shot at rock-throwing protesters to prevent them from entering the Jewish State from Lebanese territory.

They said 112 people had been wounded in the shooting incident in the Lebanese border village of Maroun al-Ras.

Syrian media reports said Israeli gunfire killed two people after dozens of Palestinians infiltrated the Israeli-occupied Golan Heights from Syria, along a front line that has been largely tranquil for decades.

"This appears to be a cynical and transparent act by the Syrian leadership to deliberately create a crisis on the border so as to distract attention from the very real problems that regime is facing at home," said a senior Israeli government official, who declined to be named.

"Syria is a police state. People don't randomly approach the border without the approval of the regime."

On Sunday, hundreds of protesters flooded the lush green valley that marks the border area, waving Palestinian flags. Israeli troops attempted to mend the breached fence, firing at what the army described as infiltrators.

"We are seeing here an Iranian provocation, on both the Syrian and the Lebanese frontiers, to try to exploit the Nakba day commemorations," said the army's chief spokesman, Brigadier-General Yoav Mordechai.

Syria is home to 470,000 Palestinian refugees and its leadership, now facing fierce internal unrest, had in previous years prevented protesters from reaching the frontier area.

To the southeast, on Jordan's desert border with Israel, Jordanian police fired teargas to disperse hundreds of pro-Palestinian activists gathered at a border village.

Israeli forces did not fire over the Jordanian border.

On Israel's tense border with Gaza, Israeli gunfire wounded 82 demonstrators nearing the fence, medics said. Israeli forces said they shot a man trying to plant a bomb near the border.

In Tel Aviv, Israel's commercial hub, a truck driven by an Arab Israeli slammed into vehicles and pedestrians, killing one man and injuring 17 people.

Police were trying to determine whether that incident was an accident or an attack. Witnesses said the driver, who was arrested, deliberately ran amok with his truck in traffic.

In the Israeli-occupied West Bank, Palestinian youths and Israeli forces clashed for hours at the main checkpoint dividing the Ramallah from Jerusalem, a constant flashpoint.

Palestinians threw rocks and soldiers fired rubber bullets and teargas to drive them away from the Qalandia checkpoint.

In Egypt, police fired teargas to force back several hundred pro-Palestinian demonstrators who had broken through a barricade in front of the Israeli embassy in Cairo, witnesses said.

Israeli Defense Minister Ehud Barak said the border challenge was foreseen, but not easy for Israel to handle.

"For months we have been discussing the possibility of the organization of mass processions. I don't think there is a magic solution for all situations," he told Israeli television.

"The Palestinians' transition from terror carried out by suicide bombers to mass demonstrations, on purpose without weapons, is a transition that poses many challenges. And we will deal with them in the future," Barak said.

The day's bloodshed will complicate decisions to be made by President Barack Obama, who is due to deliver a major Middle East policy speech on Thursday.

U.S.-brokered peace talks between the Palestinians and Israel broke down last year and no new negotiations are in the offing, with the U.S. Middle East peace envoy George Mitchell announcing his resignation last week..