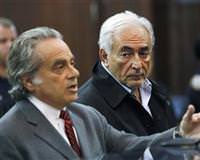 IMF chief Dominique Strauss-Kahn bedded down at New York's notorious Rikers Island jail on Monday night in a rapid and dramatic fall from grace after he was charged with trying to rape a hotel maid.

Separated from other inmates for his own safety, Strauss-Kahn was put in a bare 11-by-13-foot (3.5-by-4-metre) cell and given basic bedding, a drinking cup, soap, shampoo and toothpaste.

Just three nights earlier, Strauss-Kahn had slept in a luxurious $3,000 (1,850 pounds)-a-day hotel suite complete with conference room, living room, marble bathroom and a bedroom with a king-sized bed and feather and down duvet.

It was in that same suite in the Sofitel hotel near Times Square that Strauss-Kahn allegedly attacked a maid on Saturday afternoon. Since then, his sparkling career has crumbled.

His lawyers say he is innocent but he could still lose his job as head of the International Monetary Fund, which oversees the world economy, and his hopes of running in France's presidential election next April are in tatters.

Strauss-Kahn, 62, was transferred to Rikers Island after a New York judge earlier denied his request for bail. Wary of possible attacks on the globe-trotting IMF chief, officials have put him in the smallest of the 10 jails in the vast Rikers complex and separated him from the other inmates.

He said Strauss-Kahn will be kept from other inmates even when allowed out of his cell to stretch his legs, exercise or watch television.

The IMF chief looked drained and tense in his first court appearance earlier on Monday as prosecutors detailed his alleged attack against the maid.

"He sexually assaulted her and attempted to forcibly rape her. When he was unsuccessful, he forced her to perform oral sex on him," Assistant District Attorney John McConnell told the court.

Strauss-Kahn faces up to 25 years in prison if convicted.

Judge Melissa Jackson was persuaded by prosecutors that Strauss-Kahn, might try to flee to France, so she ordered him put behind bars and set a new hearing for Friday. Police had pulled Strauss-Kahn off an Air France jet on Saturday just minutes before it was to leave for Paris.

His lawyers are expected to appeal the judge's bail decision and it could be a key issue in the case. Bail would give Strauss-Kahn much better access to his attorneys and allow him to live in New York with his wife, prominent French television personality Anne Sinclair, while awaiting trial.

Without it, he could face a long wait in a miserable jail cell, an ordeal that experts say could push him towards a plea bargain deal.

While at Rikers, Strauss-Kahn will likely be allowed three visitors a week aside from his lawyer, and will be given one hour a day for exercise.

The charismatic, multilingual and witty Strauss-Kahn won wide praise for his leadership of the IMF during the 2007-2009 global financial meltdown as well as the euro zone's current debt crisis, and his arrest has thrown the Fund into turmoil.

The IMF board has so far held off on deciding whether or not to remove him from his job. If he is forced out, there could be a fierce battle over who would succeed him, weakening the IMF's efforts to deal with the euro zone crisis.

The board also faces embarrassing questions about why it let Strauss-Kahn off with just a reprimand in 2008 after he was found to be having an extra-marital affair with a subordinate. Persistent rumours inside the IMF that he often made unwanted sexual advances to women have long dogged his tenure there.

France's election campaign has also been turned upside down since Strauss-Kahn's arrest. He had been widely tipped to win the Socialist Party's nomination and early opinion polls showed him ahead of President Nicolas Sarkozy.

Unless the criminal case against him quickly collapses and he is proven innocent, Strauss-Kahn has no hope of running for president.

His rapid plunge appears to immediately benefit the conservative Sarkozy and far-right leader Marine Le Pen, while the Socialist Party is in disarray.

Its leaders were to meet for crisis talks on Tuesday to map out a new plan of attack for the election.

Strauss-Kahn's high-profile lead attorney Ben Brafman was defiant on Monday, saying that forensic evidence taken by police from Strauss-Kahn over the weekend "will not be consistent with a forcible encounter".

"We believe we will prove ... that Mr. Straus is innocent of these charges," Brafman told reporters. "I think it's important that you all understand that this battle has just begun."

Brafman successfully defended pop star Michael Jackson from molestation charges in 2005 and legal experts say his team will almost certainly try to dig up information on the maid in the Strauss-Kahn case.

"It would be inconceivable to me they're not investigating that person to see if there are any weaknesses in her case," said Roland Riopelle, a partner at New York law firm Sercarz and Riopelle.