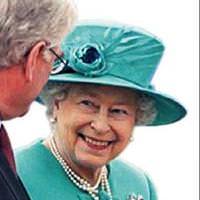 Queen Elizabeth honored Irish people killed fighting for independence from Britain on Tuesday in a powerful gesture of reconciliation few people would have believed possible even in recent times.

The queen laid a wreath at Dublin's Garden of Remembrance, Ireland's monument to its fallen heroes, before a hushed crowd of dignitaries, soldiers and her husband, the Duke of Edinburgh, whose uncle was killed by militant Irish nationalists in 1979.

The visit, the first by a British monarch since Ireland won independence from London in 1921, is designed to show how warm neighborly relations have replaced centuries of animosity but security was tight after a homemade bomb was found.

Streets around each royal stop were cleared of onlookers giving Dublin an eerily deserted feel and underlining that this was a state visit like no other.

In Trinity College, Ireland's oldest university founded with a charter from Queen Elizabeth I, a raffle determined which students and staff got close to the monarch.

Huge crowds were unlikely even if the queen had been doing public walkabouts. While most Irish people welcome the monarch's visit they remain proud republicans and would feel uncomfortable waving the British flag, or union jack.

"My mother would have loved to have lived to see this day," said Alex Wrafter, an unemployed 67-year-old whose mother moved from London to just south of the Northern Irish border in 1939.

"I don't think she would ever have believed it but I think it's extraordinarily important. The past needs to be put where it belongs."

A 1998 deal ending Irish nationalists' guerrilla war against British rule of Northern Ireland paved the way for the four-day sojourn but threats from militant republican groups opposed to the peace process have kept the city on edge.

A makeshift bomb was found in a bus headed for Dublin late on Monday. It was destroyed in a controlled explosion by the army in Maynooth, 25 km (15 miles) from Dublin, after a telephone warning to police.

"They are dragging us into the dark ages," said Tom O'Neill, a 34-year-old salesman. "There are some people in Ireland that have to get over the whole English thing."

The visit prompted Ireland's largest-ever security operation. Snipers took up positions on roofs, while some 4,000 police officers and 2,000 soldiers patrolled the capital.

Around 200 protesters chanting "Brits Out" threw bricks, bottles and fireworks at police and were pushed back with riot shields and batons.

In a second demonstration close to the Garden of Remembrance, demonstrators brandished placards with "Britain Out of Ireland" and "Irish Blood on English Hands" written on them.

"It's a disgrace that we are welcoming the commander in chief of the British forces to Dublin," said Sean Keogh, a member of the 32-County Sovereignty Movement, which wants Britain to withdraw from the six counties of Northern Ireland.

"She's clearly not welcome here. Where are the crowds? Where are all the people waving union jacks?"

Anglo-Irish conflict goes back centuries, marked by a bitter history of settlement by British Protestants in the mainly Catholic country. But generations of Irish emigration has created a strong bond between the two countries.

Most Irish people are impressed at the length and scope of the queen's visit and are hoping it puts the country, still reeling from its banking crisis, in a more positive light.

Though the monarch's visit is about reconciliation there are constant reminders of the violent past.

Her arrival coincided with the 37th anniversary of bombings in Dublin and Monaghan, the single bloodiest day in the three-decade long Northern Ireland conflict.

Over 200 people gathered at the site of one of the bombings in Dublin to lay flowers and remember the 33 people killed.

Many Irish people have a gossipy interest in the British royal family as proven by the empty streets during the televised April 29 wedding of Prince William to Catherine Middleton.