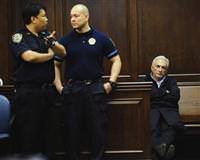 Dominique Strauss-Kahn faced growing pressure to quit as head of the IMF after his arrest on attempted rape charges, as some French politicians expressed outrage over his treatment by U.S. authorities.

The battle to succeed Strauss-Kahn, who is alone in a cell at New York's notorious Rikers Island jail, heated up when China, Brazil and South Africa challenged Europe's long-standing grip on a job that is pivotal to the world economy.

The IMF chief is expected to remain in the jail, known for its gang violence, at least until his next appearance in court on Friday, when his lawyers may again request bail.

It could be six months before a trial begins, legal experts said. A law enforcement source said Strauss-Kahn was under suicide watch as a precautionary measure.

The IMF said it had not been in touch with Strauss-Kahn since his arrest, but believed it would be important to do so "in due course." Two IMF board sources told Reuters the board would ask Strauss-Kahn whether he planned to continue in his post.

One of the sources said it would be ideal if Strauss-Kahn resigned. The second source said that sentiment was not shared across the 24-member board, which has the authority to remove him.

Strauss-Kahn is accused of a violent sexual attack on a maid who came to clean his luxury suite at the Sofitel hotel in Manhattan on Saturday, and of trying to rape her. His lawyer has said he will plead not guilty. If convicted, he could face 25 years in prison.

In the United States, which is the IMF's biggest shareholder, politicians began questioning the viability of his tenure as head of the institution charged with managing the world economy and central to negotiating debt crisis deals.
"I can't comment on the case, but he is obviously not in a position to run the IMF," U.S. Treasury Secretary Timothy Geithner said.

Strauss-Kahn's arrest has thrown the IMF into turmoil just as it is playing a key role in helping euro zone states like Greece and Portugal tackle debt woes.

Senate Foreign Relations Committee Chairman John Kerry stopped short of calling for Strauss-Kahn's resignation, but he called the circumstances of the case "troubling if not damning."

"If the evidence is what it appears to be, I think it would be very difficult for him to manage" as IMF head, Kerry said.

"Given the situation, that bail has been denied, he has to consider that he would otherwise do damage to the institution," said Austrian Finance Minister Maria Fekter.

Spanish Economy Minister Elena Salgado cast doubt on Strauss-Kahn's judgement, and said it was up to the IMF chief to make a decision on resignation.

"That is a decision which it is to up to Mr. Strauss-Kahn to take, but the crimes he is accused of are very serious ... . My solidarity first and foremost is with the woman who suffered the attack, if that was what happened," she told reporters.
OUTRAGE

But in France, President Nicolas Sarkozy urged centre-right lawmakers at a closed-door breakfast to show "restraint and dignity" and refrain from comment on the Strauss-Kahn case, participants said.

Many French Socialist leaders voiced outrage at the way Strauss-Kahn, who was considered a front-runner for the French presidency, had been paraded -- handcuffed and unshaven -- by New York police before he had a chance to defend himself in court. Former French Culture Minister Jack Lang called the treatment a "lynching" that had "provoked horror and aroused disgust."

The U.S. justice system, he said, was "politicized" and the judge appeared to have been determined to "make a Frenchman pay." Other senior Socialists said that displaying the IMF chief in handcuffs escorted by burly policemen violated his right to be presumed innocent until found guilty by a court.

New York Mayor Michael Bloomberg agreed such a display was humiliating and would be unfair if a defendant were to be found innocent. "But if you don't want to do the perp walk, don't do the crime," he told reporters.

"I don't have a lot of sympathy for that. Our judicial system works where the public can see the alleged perpetrators," Bloomberg said.

The lawyer for the alleged victim, 32, said she was traumatized and in hiding. He said she was a widow with a 15-year-old daughter, who moved to New York from the West African nation of Guinea about seven years ago, he said.

"She didn't have any idea who he was or have any prior dealings with this guy," Jeffrey Shapiro, a New York personal injury lawyer, told Reuters.

Strauss-Kahn has been in custody since he was marched off an Air France jet on Saturday to face the charges.
Emerging countries are starting to flex their muscle over who should succeed Strauss-Kahn, who had been expected to leave soon anyway to run for French president. The job has been a virtual sinecure for Europeans. They have held all 10 managing director positions since the fund was created in 1945, and four of them have been Frenchmen.

China said on Tuesday the selection of the next IMF boss should be based on "fairness, transparency and merit."

It marked the first time that China, the fund's third largest member, weighed in early and so publicly on an IMF selection debate.

China's Foreign Ministry declined to comment on the charges against Strauss-Kahn. But a spokeswoman, asked about how IMF leaders are chosen, said, "We believe that this should be based on the principles of fairness, transparency and merit."

South African Finance Minister Pravin Gordhan and a senior Brazilian government official, who asked not to be named, said the next IMF chief should be from a developing country, pressing a case to give emerging economies a greater say in world affairs.

But Brazilian Finance Minister Guido Mantega said the Strauss-Kahn affair should not be used as a way to press for changes in the way the IMF head is picked, telling GloboNews TV the discussion "is too premature at this point."

"I am all appalled by this situation and I really hope that the situation gets resolved so Dominique can return -- he is probably one of the best IMF chiefs that we had in the past years," Mantega said.

In Paris, the Socialist Party's leadership staged a rare show of unity amid consternation over the probable loss of the centre-left's most popular contender to unseat conservative Sarkozy in next April's election.
"Unity, responsibility, combativity, these are the three words which came up the most this morning," Socialist leader Martine Aubry told reporters after an emergency meeting.

"There was emotion, of course, and the shock we all feel, but it is our responsibility to be up to the task," she said.

Strauss-Kahn has neither resigned from the Washington-based IMF nor dropped out of the French race so far.

Sarkozy, whose approval ratings had slumped to a record low of 20 percent, received another campaign boost with news that his wife, singer and former model Carla Bruni, is expecting a child later this year.

The Socialists agreed they would not change the selection timetable, which calls for candidates to register by July 13 for a primary election to be held in October.