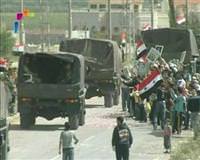 The West warned of more pressure on Syria on Tuesday if a crackdown against pro-democracy protests continues, hours after tanks stormed a city in the south, cradle of an uprising against Baathist rule.

Secretary of State Hillary Clinton said that both the European Union and the United States -- which have already slapped sanctions on a number of senior Syrian officials but not on President Bashar al-Assad -- were planning more steps.

"We will be taking additional steps in the days ahead," Clinton said, saying she agreed with European Union foreign policy chief Catherine Ashton, who told reporters that the time for Syria to make changes was now.

Rights activists say a crackdown to crush a two-month wave of protests against Assad has killed at least 700 civilians.

Syrian tanks moved into a southern city in the Hauran Plain on Tuesday after encircling it for three weeks, activists said.

Soldiers fired machineguns in the air as tanks and armored personnel carriers entered Nawa, a city of 80,000 people 60 km (40 miles) north of the southern town of Deraa, according to activists from the region.

"The troops are now combing neighborhoods in Nawa and arresting scores of men," one activist said.

In Deraa, tanks remained in the streets after the old quarter was shelled into submission last month and residents gave accounts of mass graves which the authorities denied.

The southern towns of Inkhil and Jassem remained also besieged, rights campaigners said, adding that mass arrests continued in the Hauran Plain and other regions of Syria.

Assad had been partly rehabilitated in the West in the last three years, but the use of force to quell dissent in the last two months has reversed that trend.

The United States had condemned the crackdown as "barbaric."

French Foreign Minister Alain Juppe said on Tuesday France and Britain were close to getting nine votes for a resolution on Syria at the U.N. Security Council, but Russia and China were threatening to use their veto.

Half of Kuwait's 50 lawmakers urged the Gulf Arab state on Tuesday to cut ties with Syria and expel its ambassador in protest at the violence to crush the protests.

Villagers near Deraa have found two separate graves containing up to 26 bodies, residents said on Tuesday, but Syrian authorities dismissed such reports as part of "campaign of incitement" that targeted the country.

Four residents told Reuters that villagers had contacted the local civil defense after noticing two mounds of earth in wheatfields just outside Deraa's old city district. Under the mounds were 22 to 26 decomposed corpses, they said.

Their reports could not be verified because authorities have barred most international media from operating in Syria.

Since Assad sent tanks into Deraa three weeks ago, the army has moved into several other protest centers in the south, around the capital Damascus and on the Mediterranean coast.

The government blames most of the violence on armed groups backed by Islamists and outside powers, saying they have also killed more than 120 soldiers and police.

Soldiers moved on Saturday into the town of Tel Kelakh, close to Lebanon's northern border.

Human rights campaigners said scores of people had been arrested since Monday and that Assad's forces were firing at several neighborhoods in the city of 30,000 people.

A Reuters correspondent on the Lebanese side of the border heard shooting and could see smoke rising from the village of Arida, which lies between Tel Kelakh and the border.

"They destroyed the houses, they cut electricity and water. The wounded are dying in our hands and the dead are strewn on the streets," a Tel Kelakh resident told Reuters by telephone.

She said she was hiding in a basement with seven families.

In her stone house just a few meters inside Lebanese land, Umm Fatima said she had sent her nine children to the nearby village of Wadi Khaled for safety.

"All night and day, there's gunfire. I'm so scared it will reach our homes -- I don't dare leave my home," she said.

The Syrian Observatory for Human Rights said there were also mass arrests in the cities of Homs, Deir al-Zor and Latakia, which security forces had "robbed of normality."

Assad has tried a mixture of reform and repression to stem the protests, inspired by uprisings across the Arab world.

Authorities say he intends to launch national dialogue talks, a gesture rejected by opposition leaders and the main activists' protest group who say security forces must first stop shooting protesters and political prisoners must be freed.