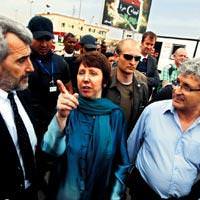 European Union foreign policy chief Catherine Ashton pledged support for rebels in east Libya on Sunday, making the most senior visit to the area by a foreign official since a revolt against Muammar Gaddafi began.

"I saw the posters on the way from the airport to here saying 'We have a dream' and I'm here today to explain not only about our short-term support but also the breadth of our support," Ashton said in the rebel stronghold of Benghazi.

Visiting to open a representative office for the EU, Ashton toured the square next to the Benghazi court house, epicenter of the revolt that erupted in mid-February.

Several Libyans surrounded her, flicking "V-for-Victory" signs. One man nearby said: "Every Libyan is very happy."

France, Britain and other European states have been at the forefront of efforts to support Libya's rebels. French planes were the first to bomb Gaddafi's forces in March after the United Nations voted to allow intervention to protect civilians.

Ashton's visit "shows the increased support of the European Union in supporting us to have a democratic and free state," said the head of the Benghazi-based National Transitional Council, Mustafa Abdel Jalil.

"The Libyan people appreciate this visit and appreciate the European Union for supporting the revolution since its beginning," he added.

"We seek to support, not just now, but for the future and as long as the people of this country wish us there," she said.

The most foreign senior visitor to visit the rebel-held region until now had been the Polish foreign minister, Radoslaw Sikorski, who traveled to Benghazi on May 11.

One source said EU experts had reached an agreement to put six ports -- Tripoli, Zuara, Zawiyah, Al-Khoms, Ras Lanuf and Brega -- on the list. Proposals could be submitted to the EU sanctions committee next week.

Another EU diplomat said the measure could be discussed by foreign ministers who meet in Brussels on Monday.

The revolt against the Libyan leader's rule has crippled the refining industry and Gaddafi urgently needs fuel imports. His government wants to raise fuel imports by using a loophole in international sanctions.