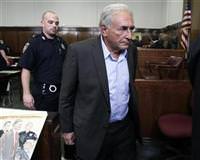 Former IMF chief Dominique Strauss-Kahn remained under house arrest and armed guard on Saturday in an apartment in New York's financial district that has become a tourist attraction.

Strauss-Kahn, who was released from jail on Friday, was expected to stay in the apartment in Manhattan for a few days until permanent housing could be found, as he defends himself against charges of raping a maid in a New York hotel.

A trial may be six months or more away.

The temporary housing was arranged by a private security company that is guarding Strauss-Kahn at an estimated cost of $200,000 a month, which he is responsible for paying.

Satellite trucks lined the block outside the apartment, and scores of reporters and photographers waited for a glimpse of the man who until a week ago was one of the most powerful financial figures in the world.

Once a strong contender to be the next president of France, Strauss-Kahn resigned as head of the International Monetary Fund on Wednesday. French Finance Minister Christine Lagarde was seen as the leading contender to succeed him.

Strauss-Kahn was detained by police in New York a week ago, just hours after the alleged attack at the Sofitel hotel in Manhattan. He is due to reappear in court on June 6, when he will formally answer the charges.

He denies the sexual assault accusations made by the maid, a 32-year-old widow from Guinea. If convicted, he could face 25 years in prison.

Word of the new tenant at 71 Broadway quickly spread. Curious pedestrians questioned police officers stationed at the entrance and took pictures of the media.

A guide on a tour bus heading down the street could be heard on a microphone pointing out the building as the one where Strauss-Kahn was staying.

Some neighbors seemed less than thrilled, complaining about the added security and throngs of media.

A deal to have Strauss-Kahn stay in an apartment on the city's Upper East Side fell through after the media besieged the building.

He is only allowed to leave his apartment to travel within Manhattan for court appearances, meetings with his lawyers, medical appointments and a weekly religious observance.

His legal team has informally sought public relations advice from a Washington consulting firm, TD International, run by former CIA officers and U.S. diplomats. A source said if the firm signs on, its role will be helping in crisis management.

Also in France, feminist organizations published a petition saying they were "stunned by the daily flood of misogynist comments by public figures" since Strauss-Kahn was detained.

They said his friends and allies have downplayed the plight of the alleged victim -- former French culture minister Jack Lang said Strauss-Kahn should have been released earlier, considering "nobody has died."

"We are witnessing a sudden rise of sexist and reactionary reflexes, so quick to surface among part of the French elite," the groups said in a statement on the website of the newspaper.

With the sudden vacancy in the IMF's top job, its board has said the process for finding a new chief would be completed by June 30. With the euro zone debt crisis still far from controlled, European and U.S. officials want to move quickly.

The chair of the IMF's main advisory panel, the International Monetary and Financial Committee, Tharman Shanmugaratnam, who is also Singapore's finance minister, said it was imperative that the process be open and transparent.

"The challenges we face are pressing and an early conclusion to the selection process will be advantageous," he said in a statement on Saturday.

Lagarde, backed by many European governments, has been praised for her role in tackling the European debt crisis and the handling of demands of advanced and developing economies through France's presidency of the Group of 20 this year.

But developing countries, with growing clout in the world economy, were keeping pressure on Europe and the United States to avoid a backroom deal over the appointment.

The IMF has been run by a European ever since it was created at the end of World War Two.

Lagarde, who headed U.S. law firm Baker & McKenzie in Chicago before joining the French government in 2005, would be the first woman to head the IMF.

Former Turkish economy minister Kemal Dervis had been seen as another frontrunner, but he ruled himself out on Friday, putting pressure on emerging nations to find a consensus candidate.