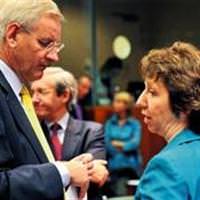 The European Union imposed sanctions on Syrian President Bashar al-Assad and other senior officials on Monday, raising pressure on his government to end weeks of violence against protesters.

EU foreign ministers agreed at a meeting in Brussels to expand restrictions against Syria by adding Assad and nine other senior members of the government to a list of those banned from traveling to the EU and subject to asset freezes.

In London, U.S. Secretary of State Hillary Clinton also urged Assad to halt the violence against demonstrators seeking reforms, saying that nearly 1,000 people had been killed.

"This cruelty must end and the legitimate aspirations of the Syrian people must be honored," Clinton told a news conference with her British counterpart William Hague.

"Stop the killings, the beatings, the arrests, release all political prisoners and detainees. Begin to respond to the demands that are upon you for a process of credible and inclusive democratic change."

Moualem said he expected more political and economic measures, but no attempt at a "military solution."

"The president is our leader, we will continue with that, and I am sure that we will emerge from this crisis stronger."

The demonstrators in Syria first called for greater freedoms, but hardened their demands to calling for Assad's overthrow as the violence against them increased.

Clinton's estimate of the number of people killed in the suppression of popular protests was above the latest figure of more than 800 civilians issued by human rights groups.

Witnesses said security forces had killed 11 people in the city of Homs on Saturday during a funeral for those killed in the latest crackdown. Such reports are hard to verify because Syria has excluded most foreign media.

The EU action follows a ban on 13 of Assad's closest allies and an arms embargo imposed earlier in answer to the crackdown.

The EU foreign ministers said in a statement they were "determined to take further measures without delay should the Syrian leadership choose not to change its current path."

Syrian authorities have blamed most of the violence on armed groups backed by Islamists and foreign powers, who they say have killed more than 120 members of the security forces.

The EU's 27 governments have argued about the effectiveness of sanctions, some questioning whether the EU can be effective in cutting off Assad's access to finance. But they appeared to agree on Monday that a rapid escalation of pressure was needed.

German Foreign Minister Guido Westerwelle said: "If someone represses his own people like that, responds to peaceful demonstrations with force, this can't be left unanswered by the European Union."

The EU ministers urged Syria to grant access to a U.N. rights mission and humanitarian organisations.

"The EU is deeply concerned at continuing mass arrests, intimidations and instances of torture, and calls for their immediate halt," the statement said.

The ministers urged the Syrian authorities to launch an inclusive national dialogue and implement meaningful political reforms without delay.