France and Britain to use attack helicopters in Libya 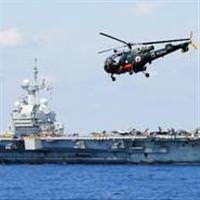 France and Britain will deploy attack helicopters in Libya, French officials said on Monday, a step aimed at better targeting Muammar Gaddafi's forces which could help rebels break the stalemate.

Continued shelling of the rebel-held western port of Misrata illustrated the problem facing rebel forces and NATO. Rebels said Gaddafi forces were trying to advance into the long-besieged city under cover of rocket and mortar shells.

Hospital officials said two people were killed and several wounded in Monday's fighting in Misrata. Later in the day, explosions were heard outside the city, lasting about an hour.

A rebel spokesman said forces loyal to Gaddafi also shelled the rebel-held town of Zintan and massed troops close to another town in the mountainous region bordering Tunisia, intensifying operations on the war's western front.

U.S. Secretary of State Hillary Clinton, in an interview with CBS News, said pressure on Gaddafi was increasing.

"I think we are seeing slow but steady progress. The pressure on the Gaddafi regime has increased to the point that Gaddafi's wife and daughter fled across the border into Tunisia in the last two days," she said. "The oil minister has defected."

"There is an enormous amount of increased messaging going to Gaddafi, not just because of the military strikes but from those who he thought were in his camp or at least wouldn't try to push him to leave."

Residents in the capital Libya have heard fewer planes overhead in the last day or two, but a NATO official said bad weather had temporarily hampered NATO air strikes.

Confirming the proposed use of helicopter gunships, French Foreign Minister Alain Juppe told reporters in Brussels the move was in line with a United Nations resolution to protect Libyan civilians and NATO's military operations.

"What we want is to better tailor our ability to strike on the ground with ways that allow more accurate hits," he said.

NATO bombing has damaged Gaddafi's armor but not enough to break a deadlock between rebels and government forces. While helicopters could make it easier to strike urban targets, they would also be more vulnerable to ground fire.

Britain was also sending helicopters, French Defense Minister Gerard Longuet said, but no other nation planned to follow suit. London was tight-lipped. "We are not in the habit of talking about any new missions we undertake until they are in operation," a British government spokeswoman said.

The French daily Le Figaro reported 12 helicopters were shipped to Libya on the French warship Tonnerre on May 17.

A U.N. Security Council resolution allows NATO to strike Gaddafi forces in Defense of civilians, but it explicitly excludes any military occupation. Critics such as Russia accuse NATO of overstepping their mandate in prosecuting a systematic campaign to force an end to Gaddafi's 41-year rule.

According to Le Figaro, French special forces, who have been in Libya to identify targets for NATO since the start of air strikes, could now be reinforced to guide helicopter attacks.

Intensifying diplomatic activity ahead of a G8 meeting of world powers in France this week, the most senior U.S. diplomat to visit during the uprising arrived in the eastern city of Benghazi for talks with leaders of the rebellion.

Jeffrey Feltman, assistant secretary of state for the Near East, met members of the National Transitional Council formed to administer the eastern regions under rebel control.

Gaddafi describes his opponents as religious extremists, criminals and foreign-backed mercenaries. He says he has no intention of stepping down after the manner of Tunisian and Egyptian autocratic leaders overthrown in an "Arab Spring" of democratic protest that swept the Middle East.