Obama's "Beast" gets stuck in Dublin 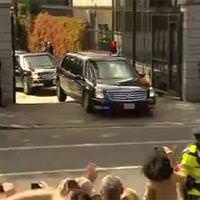 The Presidential Cadillac, nicknamed "The Beast" for its bomb-proof features, failed to make it out of the U.S. Embassy in Dublin Monday when it became stuck on a ramp.

Specially built to withstand bombs, bullets and chemical attack, the car beached itself on the top of a ramp as it tried to exit the embassy during Barack Obama's one-day visit to Ireland.

The White House later said Obama and his wife, Michelle, were not in the vehicle at the time.

Crowds waiting outside the embassy for a glimpse of the First Couple cried "Oooh" upon hearing the crunch of heavy metal as the body of the car struck the ground between its front and back wheels. One man shouted: "Need a push?"