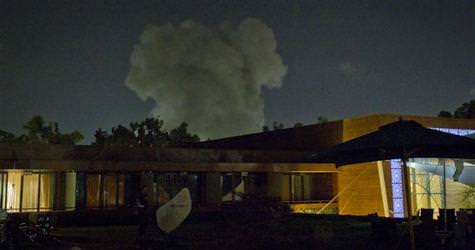 The death toll from NATO air strikes on Tripoli and its suburbs has risen to 19, Libyan state television reported on Tuesday, showing footage of civilians with head wounds.

NATO warplanes delivered some of their heaviest air strikes yet to Muammar Gaddafi's compound after the United States said the Libyan leader would "inevitably" be forced from power.

"Nineteen civilians martyred and 150 were wounded in a crusader NATO strike on Tripoli and its suburbs," Jamahiriya television said, airing footage of at least three young men on stretchers with gaping head wounds and covered with dust.

A Libyan government spokesman had earlier said three people had been killed and 150 wounded, and that the casualties were local residents.

A NATO official said the strikes hit a military facility that had been used to launch attacks on civilians.