Obama warns Gaddafi "no let up" 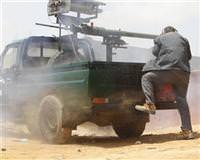 President Barack Obama warned Libyan leader Muammar Gaddafi on Wednesday there would be 'no let up' in pressure on him to go, following a second successive night of heavy NATO bombing in Tripoli.

Obama told a London news conference with British Prime Minister David Cameron he could not predict when Gaddafi, holding onto power in the face of a three-month-old insurgency, might be forced to go. But he added:

"I absolutely agree that given the progress that has been made over the last several weeks that Gaddafi and his regime need to understand that there will not be a let-up in the pressure that we are applying.

"I believe that we have built enough momentum that as long as we sustain the course that we are on that he is ultimately going to step down," he added.

Fighting between Gaddafi's forces and rebels has reached stalemate, despite two months of NATO aerial support under a U.N. mandate intended to protect civilians.

Strikes drove back Gaddafi forces shortly after he pledged "no pity, no mercy" to rebels holed up in their stronghold of Benghazi. But rebels have since proved unable to break the resistance of better-trained and equipped government troops.

"There are more and more centers of resistance (to Gaddafi), especially in the west," Juppe said in the French parliament. "Defections are speeding up."

France said this week it would deploy attack helicopters to ensure more precise attacks against Gaddafi forces embedded among the civilian population of Libyan cities. Britain said on Tuesday it was considering doing the same.

A NATO official said the alliance hit a vehicle storage bunker, a missile storage and maintenance site and a command- and-control site on the outskirts of Tripoli. Government targets around the Western rebel outpost of Misrata had also been hit.

"We were quite active in the past 24 hours and will continue to be so," the official said. "Striking fighting units and people trying to give the orders is having the desired effect."

British Foreign Secretary William Hague dismissed fears that Western states were being drawn into an Iraq-style conflict. "It's very different from Iraq because of course in the case of Iraq there were very large numbers of ground forces deployed from Western nations," Hague told BBC Radio on Wednesday.

Diplomatic activity is intensifying. G8 world powers will discuss ways to break the impasse this week, with some expecting Russia to propose a mediation plan to the meeting.

South African President Jacob Zuma announced he would visit Tripoli next week for talks with Gaddafi in his capacity as a member of the African Union panel for the resolution of the conflict in Libya,.

The South African president headed an African Union mission to Tripoli in April but the bid to halt the civil war collapsed within hours.

While critics argue NATO has overstepped its mandate, rebels complain Western forces are not doing enough to break Gaddafi.

The United States bolstered the credentials of the Benghazi-based rebel National Transitional Council as a potential government-in-waiting on Tuesday when a U.S. envoy invited it to set up a representative office in Washington.

Unlike France, Italy and Qatar, the United States has not established formal diplomatic ties with the rebels. Jordan said on Tuesday it recognized the rebel council as a legitimate representative of Libya's people and planned to open an office in Benghazi.

A French newspaper said Gaddafi was tired of fighting a civil war under constant pressure from NATO bombs, and would step down if allowed to remain in his country.

It said Gaddafi, traumatized by the death of a son and three grandchildren in a NATO raid, was tired of living as a hunted man and spent several hours a day watching Arabic news channels and surfing news on Arab, English and Italian web sites. In his public pronouncements, Gaddafi has vowed to fight to the death.