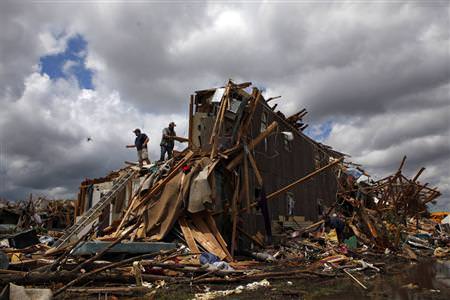 The death toll from a monster tornado that savaged Joplin, Missouri, rose to 125 on Wednesday and tornadoes overnight in nearby states caused at least 15 more deaths.

Three days after the deadliest single tornado in the United States in 64 years, rescue teams with dogs sifted through rubble in Joplin without finding anyone alive on Wednesday.

Authorities said the operation was still a search and rescue, but hope of finding more people alive was fading.

The number of people injured by the massive tornado was revised up to more than 900, according to local authorities, from 823 earlier in the day.

Officials were no longer saying how many people are missing because they believe the figure of 1,500 missing mentioned earlier in the week was inflated by double counting or people simply being out of town.

Some families continued a desperate search for missing loved ones amid the ruins of homes and businesses.

Fifteen-month-old Skyular Logsdon, whose blue teddy bear, red t-shirt and pants were found wrapped around a telephone pole after the storm, remains missing, his great grandmother told Reuters on Wednesday.

His injured parents were found and taken to a hospital after the tornado. But the little boy has vanished.

"We're still hopeful," said Deb Cummins, great grandmother of the missing boy. She said they have checked every possible hospital.

Another wave of tornadoes roared across the Midwest on Tuesday night, leaving nine dead in Oklahoma, four fatalities in Arkansas and two in Kansas, officials said.

In Newcastle, south of Oklahoma City, a storm blew the steeple off Jesus Alive Church and carried it nearly 100 yards away, where it landed on the doorstep of the longtime pastor's 86-year-old mother, Lovina Frizzell.

"I said 'Oh, my goodness, there's the steeple,'" Frizzell said as she swept her front porch.

In Oklahoma alone, seven tornadoes tore across the state overnight, according to the National Weather Service. The deadliest of those, which killed seven persons, left a 75-mile path of destruction and lasted two hours.

Oklahoma authorities said a 22-year-old man died in hospital of injuries from the storm, bringing the death toll in the state to nine.

Severe weather was continuing on Wednesday evening further east in Arkansas, Tennessee, Mississippi and north into Illinois and Indiana, although winds so far were not as threatening as on Tuesday night, according to meteorologists.

Nervous Joplin residents were relieved after the threat of another tornado heading for the city proved to be false overnight.

The Joplin tornado on Sunday was rated an EF-5, the highest possible on the Enhanced Fujita scale of tornado power and intensity, with winds of at least 200 miles per hour.

EF-5 tornadoes are rare in the United States but already this year there have been at least four. They are so destructive that experts said they can turn a house into a missile.

Authorities in Joplin struggled to cope with the massive destruction. Some 14,000 customers in the city of 50,000 were still without power, water pressure was low in many homes and a local cable and cellphone provider had only about 20 percent of its customers back up and running normally.

A system of permits to allow residents back to their damaged homes and prevent looting was abandoned on Wednesday as long lines formed. Officials decided instead to keep a strong police and National Guard presence while allowing people free access to the miles of damaged neighborhoods.

This year has seen an unusually high number of tornadoes, with 1,168 as of May 22, compared to an average of about 671 by this time, according to Joshua Wurman, president of the Center for Severe Weather Research in Boulder, Colorado.

The U.S. is on pace to break the record for deaths from tornadoes this season, the National Weather Service has said.