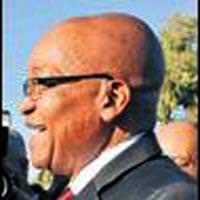 South African President Jacob Zuma will visit Tripoli next week for talks with Libyan leader Muammar Gaddafi, the presidency said in a statement on Wednesday.

Johannesburg-based Talk Radio 702 earlier reported that the aim of the visit was to discuss an exit strategy for Gaddafi but the presidency statement made no mention of that.
"President Zuma will stop over in Tripoli for a discussion with Libyan leader Colonel Muammar Gaddafi, on the 30th of May, in his capacity as a member of the African Union High Level Panel for the Resolution of the conflict in Libya," the statement said.
The South African president headed an African Union mission to Tripoli in April but the AU bid to halt the civil war collapsed within hours.
A South African government official, speaking on condition of anonymity, said the aim of the latest effort from the African Union was "to seek a breakthrough".
France and the United States have made upbeat assessments on progress towards ending Gaddafi's 41-year rule.
Talk Radio 702, citing sources in Tripoli, said Zuma's visit was in cooperation with Turkey but in Ankara the Turkish Foreign Ministry said there had been no contact on the visit.
Last week, South Africa accused Libya of misleading it over the fate of a South African photographer now believed to be dead after being shot and abandoned in the desert by forces loyal to Gaddafi.
South Africa's ruling African National Congress said it was incensed by the use of deadly force against civilians and journalists and accused Libya of dishonesty.