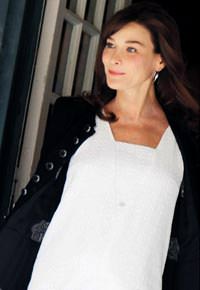 French first lady Carla Bruni showed off a rounded belly on Thursday that left little room for doubt that reports she is pregnant are true.

Posing for photographs with the wives of other leaders on the sidelines of a Group of Eight summit in the French resort of Deauville, she wore a loose-fitting white smock dress which at times stretched over an obvious bump around the midriff.

The former model has not confirmed rumors she is expecting, but she has made no great effort to dispel them; she has fended off direct questions with coy giggles and has taken to concealing a noticeably heavy midriff under baggy clothing.

On Wednesday, members of a British charity delivered a maternity basket to the 43-year-old Bruni containing a childbirth kit and hygiene supplies, as a way of publicizing the issue of child mortality in the developing world.

Her husband, President Nicolas Sarkozy, has refused to comment on the reports the first couple are expecting their first child together, but last week a German newspaper quoted his father as saying the rumors were true.

A presidential baby could be a public relations boon for Sarkozy, who is grappling with some of the lowest popularity ratings of any French leader in decades and faces a tough battle for reelection next April.

Italian-born Bruni, who has a career as a pop singer, has a son from a former relationship and has often said she would like to have a child with Sarkozy. It would be Sarkozy's fourth child after the three sons he has from two former marriages.