Syrian opposition in exile plans to meet in Turkey 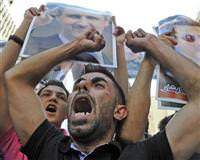 Exiled Syrian opposition activists will meet in Turkey next week to support the uprising in their homeland and help coordinate the campaign to end almost five decades of Baathist rule, organizers said on Thursday.

Representatives of protesters in Syria will also attend the 3-day conference in Antalya, which starts on June 1, they said.

Syria, which according to rights groups now has over 10,000 political prisoners, mostly detained since the start of the uprising, is a one party state and all opposition is banned.

Two months of street protests against President Bashar al-Assad's rule have endured despite a bloody military crackdown that human rights groups say has killed around 1,000 civilians.

Khalaf Ali Khalaf, a member of the meeting's secretariat, said by telephone from Turkey, that the aim was to "coordinate the democratic effort, Instead, for example, of talking individually with countries that support the uprising."

He said the conference will select representatives to help raise international pressure on Syria, but will not form a transitional council similar to that set up in Libya by rebels fighting Muammar Gaddafi.

"After discussion with prominent figures and activists in Syria we decided that it was premature to go the transitional council route, but the opposition inside will be represented at the conference," he said.

Khalaf said Turkey, Syria's northern neighbor, which has been critical of Assad for using violence against protesters, has approved holding the meeting but is not playing a role in organizing it.

Among the 300 participants will be human rights campaigner Ammar Qurabi, Radwan Ziadeh, head of the Damascus Center for Human Rights, Abdel Razzaq Eid of the Damascus Declaration opposition umbrella group, Syrian university professors in Europe and the United States and Muslim Brotherhood members.

Veteran opposition figure Walid al-Bunni, who spent eight years as a political prisoner in Syria, said by telephone from hiding inside Syria that "any conference that brings together members of the opposition, even in exile, is positive."

But he added that setting up a transitional council at this stage "would mean a prison of death sentence" for anyone who participates from inside Syria, with a continued military crackdown against demonstrations and assaults on cities.

But Louay Hussein, another outspoken critic of Syria's government, said he was against holding any conference now because it would play into the hands of authorities, who are trying to portray the demonstrations as serving a conspiracy to sow sectarian strife tied to Islamist and foreign powers.

He said protests "are taking on a dynamic of their own and becoming more organized, with a new generation of leaders emerging that should have a voice in shaping a free and democratic Syria."

"This street that moved on its own will not back down, despite the blatant repression. I prefer to wait (for a conference) until the street is stronger," Hussein said.

Activists have called for more demonstrations this Friday, calling it "the Friday of the guardians of the homeland," the nickname of the Syrian army. They say scores of soldiers had been shot by security agents for refusing to fire on civilians.

The main weekly Muslim prayers on Fridays are a rallying point for protesters because they offer the only opportunity for large gatherings, and have seen the worst death tolls.

Authorities, who blame the violence on armed groups, say 120 soldiers and police have been killed.