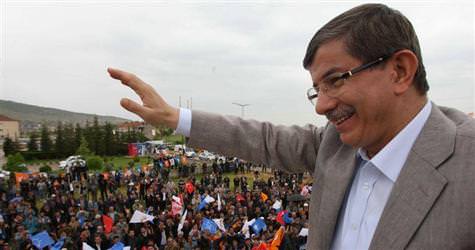 Turkey has failed to persuade Assad to end a crackdown on anti-government protesters and implement reforms despite warm ties between Ankara and Damascus.
Davutoğlu's words are among the most forceful by a Turkish official, highlighting Turkey's growing concern over a crisis that has sparked world outrage.
Davutoğlu said he believed it was possible for Syria to end the unrest but that the "treatment" should feature "shock therapy," including reforms on the economy, security, politics and the judiciary.
The comments, made in an interview with a Turkish television channel late on Thursday, were repeated in a separate interview with the New York Times, in which Davutoğlu said: "Now what (Assad) needs is shock therapy to gain the heart of his people."
Muslim Turkey, a booming economy that has applied for European Union membership, has boosted trade links with Syria and lifted visa restrictions, reflecting a wider policy of close ties with Middle Eastern countries.
But after embracing Assad as a friend, Prime Minister Tayyip Erdoğan has found his influence over the Syrian president is limited.
Erdoğan has warned Assad that unless he undertakes urgent reforms he could be toppled in the same way that protests have ousted autocrats elsewhere in the Middle East this year.
Erdoğan has said he doubted Assad was heeding his advice.
Anatolia said Erdoğan called Assad on Friday to "discuss the situation in Syria," without providing more details.
Worsening unrest in Syria could lead to security concerns in Turkey, given the religious, sectarian mix in the neighborhood, and could inundate Turkey with Syrian refugees.
Two months of street protests against Assad's rule have endured despite a bloody military crackdown that human rights groups say has killed around 1,000 people.
Exiled Syrian opposition activists will meet in Turkey next week for a conference to support the uprising and coordinate the campaign to end almost five decades of Baathist rule.
Syrian opposition figure Maamoun al-Homsi, a former member of parliament who was jailed for five years in 2001 for taking part in the Damascus Spring, said on Friday he expected the Turkish government to support the Syrian opposition.
"We hope to speak to Turkish government officials after choosing a representative group. The Turkish government gave advice to Mr. Assad at the beginning of the process but then lost its hope."