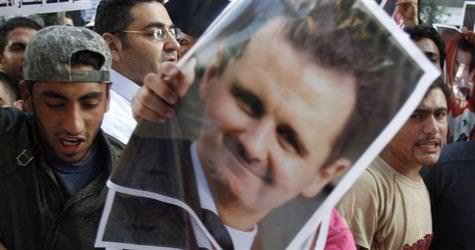 With Syrian State Leader Assad’s resistance to implementing reforms, Ankara has increased their tone of warning. Erdoğan has relayed to Assad the message that his only chance will be to “take a swift and radical step towards reforms.

Step by step Ankara continues to increase its distance from Syrian State Leader Bashar Assad's administration. Based on Assad's failure to take any steps towards reforms since the start of the uprising, a definitive line has been drawn regarding the Syria issue, now considered to be a 'national security issue.' During a telephone conversation made on Friday, May 27th, Prime Minister Recep Tayyip Erdoğan delivered the following message to Assad, "I place at least as much importance on the Syrian public's situation as a Syrian would. It's now time that radical steps that surprise everyone be taken. Emphasizing how much importance he places on the Syrian public, Erdoğan went on to state that Turkey will not remain silent regarding the attacks directed at the Syrian public and requested a timeline for reforms. Assad in return reiterated his intentions for undertaking reforms. Meanwhile all Syrian press organs in Assad's control put an end to publications opposing Turkey last week.
A DECISION TO PROTECT THE KURDS
According to diplomatic sources, had Assad taken steps towards implementing reforms in the initial days of the uprising, which has continued for ten weeks now, then the situation could have been controllable, however today the situation has become significantly more difficult.
Should Assad not announce radical reforms within the next week or two, religious conflict in Syria is expected to escalate. In addition to the religious conflict in the country, ethnic conflict in Syria is one of Ankara's gravest concerns. Despite the fact that the possibility the uprisings will not spread to Aleppo or Lazkiye appears promising, Ankara is determined to not allow a second Halepçe massacre to transpire in the region. Should the uprising continue, Aleppo is expected to feel the effects, and should an attack be directed at the Kurds in Syria, Turkey will offer protection for Kurds. In this case, Turkey will open the door for Kurds, which consist of seven percent of Syria's population as well as to those of Armenian or Circassia heritage. Preparations are also being made for Sunni refugee groups in addition to the Kurds. Between 500,000 and one million people are expected to seek shelter in Turkey to escape the Assad regime. Sources state that at this stage the borders are secured, however should the pressure continue then within 15 days' time there may be extraordinary movement in the region.
THE OPPOSITION IS IN ANTALYA
Meanwhile, Turkey is playing host to a number of meetings by the opposition in Syria. After a minor participation meeting was held at the start of the month, now Syrian's oppositional party members will be holding a larger scale meeting from May 31st to June 3rd in Antalya.