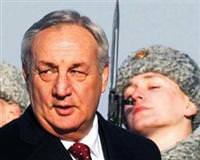 The head of Georgia's rebel Abkhazia region died in a Moscow hospital on Sunday from complications after lung surgery, Abkhaz officials said.

Sergei Bagapsh, 62, in power since 2005, won a second five-year term in 2009 as president of the separatist region, which won Russian recognition of its proclaimed independence after a brief Russian-Georgian war over another rebel province.

"I spoke to him three days ago. The president was already up and about, but two days ago his condition worsened unexpectedly. He lost consciousness," his spokesman Christian Bzhania told Russian state television.

"The doctors did everything in their power," he said. After the operation, doctors had discovered Bagapsh also had cancer.

Russia has provided Abkhazia with security since rebuffing a Georgian military assault to retake control of the breakaway region of South Ossetia in a five-day war in August 2008.

After the conflict, Moscow recognised South Ossetia and Abkhazia's independence from Tbilisi, whose rule both shook off in wars of secession in the early 1990s.

A black ribbon was tied to the Abkhaz flag flying over the province's embassy in Moscow on Sunday and Russian President Dmitry Medvedev offered his condolences.

"Bagapsh was a loyal supporter of friendship and alliance with Russia, and he tirelessly worked to deepen close bilateral ties between our countries," Medvedev said in a statement on the Kremlin's website.

Bagapsh's deputy, Alexander Ankvab, 58, will take over as acting president, and new elections will be held within three months according to the region's constitution.

"We are profoundly shocked by Sergei Bagapsh's death," Ankvab told Interfax news agency. "This is a great loss for the Abkhaz people," he said.