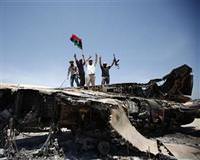 NATO aircraft destroyed guard towers at Muammar Gaddafi's compound in Tripoli, a NATO official said on Saturday, then staged a rare daytime air strike on the Libyan capital, stepping up pressure on him to quit.

"RAF Typhoons, along with other NATO aircraft, last night used precision-guided weapons to bring down guard towers along the walls of Colonel Gaddafi's Bab al-Aziziyah complex in the center of Tripoli," Major General John Lorimer, chief British military spokesman, said in a statement.

"Last night's action sends a powerful message to the regime's leadership and to those involved in delivering Colonel Gaddafi's attacks on civilians that that they are no longer hidden away from the Libyan people behind high walls," he said.

"The massive compound has not just been his home, but is also a major military barracks and headquarters, and lies at the heart of his network of secret police and intelligence agencies," Lorimer said. "Previous NATO attacks have hit command and control and other military facilities within the complex."

NATO followed its fifth straight night of attacks with a daytime strike that sent smoke skywards from the area of the Gaddafi compound. A NATO military spokesman said the daylight raid targeted "a vehicle storage compound 600 to 800 meters (1,980-2,640 feet) to the east of Gaddafi's so-called 'tent private area'. It is not part of the main Gaddafi complex."

Russia joined Western leaders on Friday in urging Gaddafi to step down and offered to mediate his departure, providing an important boost to NATO powers seeking to end his long rule.

It was a striking change in tone from Moscow, which has previously criticized the 10-week bombing of Libya. NATO intervened under a United Nations mandate to protect civilians from Gaddafi's forces, but has effectively placed itself on the side of rebels trying to topple him in a deadlocked civil war.

Russian President Dmitry Medvedev also said he was sending an envoy to Libya to begin talks. Despite Russia's move, there was skepticism that Gaddafi would agree to go. Previous attempts at mediation, by the African Union, Turkey and the United Nations, have foundered on Gaddafi's refusal to leave and the insurgents' refusal to accept anything less.

In the rebel capital of Benghazi the head of their National Transitional Council said its members would not seek office if Gaddafi is removed from power.

"I emphasize the council's decision that prohibits any of its members from running for any post in the period following Gaddafi's fall," said council head Mustafa Abdel Jalil.

"I assure everyone that we are not seeking power, and that the members of the council will work on holding elections after drafting the constitution, which we expect will take place in one year at most."

Ahmed Hassan, a rebel spokesman in Misrata, reported a major battle on Saturday in Tawargha, 50 kilometers east of Misrata.

"Rebels have managed to seize many weapons. We have put our hands on a small hospital which was full of weapons including tanks," he said. "It took us five hours to move the weapons from the hospital. Five rebels were killed and ten wounded."

Rebel-held Misrata, Libya's third biggest city and scene of some of the fiercest battles in the conflict, suffered a second day of heavy fighting on its western outskirts on Friday.

Abdelsalam, a rebel spokesman in Misrata, reported a quieter Saturday. "When Gaddafi's forces launch a failed attack they usually take two to three days to recover," he said.

"We hear many Gaddafi soldiers were killed in the battle but we don't know how many exactly," he said by telephone.

Gaddafi's forces have stepped up their attacks on Zintan, part of a chain of mountain settlements near Libya's border with Tunisia, where rebels have been holding off assaults for months.

Residents in that region say that several towns, including Ar Rujban, Jadu and Zintan have been without electricity for three or four days and were depending on dwindling supplies of fuel to run generators. Government forces from lower altitudes have shelled toward rebel villages above during the nights.

On Saturday, Juma Ibrahim, a rebel spokesman in Zintan, said the western town of Yafran remained under Gaddafi loyalist control but added that insurgents had attacked pro-Gaddafi forces in al-Kiklah, 15 km (nine miles) east of Yafran.

"Three revolutionaries were killed in the battles," he said. "The revolutionaries destroyed several military vehicles including personnel carriers and artillery batteries. Thirty Gaddafi soldiers and two officers were held hostage."