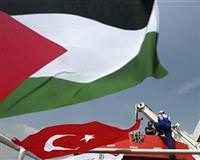 Pro-Palestinian activists told Israel on Monday not to interfere in a planned aid flotilla to Gaza in late June, barely a year after Israeli commandos boarded an aid ship killing eight Turks and one Turkish-American.

Holding a news conference on the deck of the Mavi Marmara where the May 31, 2010 confrontation occurred, a coalition of 22 activist groups called on governments to ensure there was no re-run of the incident.

U.N. chief Ban Ki-moon has asked governments to discourage activists from sending a new convoy and Turkey has told them of the risks of trying to break Israel's naval blockade of Gaza, but said they are outside government control.

Gaza is controlled by Hamas, which calls for the destruction of Israel and is regarded as a terrorist group by Western powers, including the United States and the European Union. Israel says it blockades Gaza to stop the importation of arms.

"They will not attack. We don't believe they will repeat the same big mistake against humanity," said Huseyin Oruc, a spokesman for the Turkey-based IHH Islamic charity. The activists later held a minute's silence for those who were killed in 2010.

"It is the Mavi Marmara, it is a peace boat and the other 14 boats are also peace boats," he told the news conference on the ship, overlooking the Golden Horn inlet in Istanbul, as workmen carried out maintenance work on the decks below.

In an interview with Reuters on Monday Turkish Foreign Minister Ahmet Davutoglu said the onus was on Israel to avoid any repeat of the bloodshed, adding it should abandon its illegal blockade of 1.5 million Palestinians living in the enclave.

"We are sending a clear message to all those concerned. The same tragedy should not be repeated again," he said.

But Deputy Israeli Foreign Minister Danny Ayalon warned that future flotillas would be stopped for security reasons and accused IHH of provocation, setting the stage for a possible confrontation. He said Turkey was not acting responsibly.

"No responsible country allows its citizens to go to conflict areas, areas under dispute and clashes, in which they can get hurt. We have had great success with all of the region's countries except Turkey," he told a TV interview in Jerusalem.

Turkey wants Israel to apologise for its actions on the Mavi Marmara and to compensate the families of the men shot dead.

They were shot dead after the first Israeli boarding party on the Mavi Marmara was attacked by activists wielding metal bars, clubs and knives. The incident led to a breakdown in already strained ties between Turkey and Israel.

The activists said 15 ships, including the Mavi Marmara, would be in the new flotilla, carrying 1,500 people from around 100 countries, humanitarian aid and construction materials.

But a spokesman for the "Gaza Freedom Flotilla II" vowed to keep challenging it.

"We renew our call to our governments to do their utmost to ensure that Israel does not repeat its attack on us," he said.

The United Nations has said it was giving a panel set up to investigate last year's incident more time to finish its work.

In letters to Mediterranean governments, Ban said aid for Gaza should go through "legitimate crossings and established channels" -- which in practice means through Israel -- and said he was concerned by reports of a new flotilla.

He called on Israel to "act responsibly" to avoid violence.

Activists say it is legal for them to send goods by sea directly to the coastal Gaza Strip.