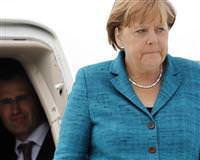 Iran temporarily withdrew flyover rights for the plane carrying German Chancellor Angela Merkel to India on Tuesday, forcing it to circle over Turkey for two hours before the rights were restored and she could land in New Delhi.

"An unusual start to the India trip," Merkel's spokesman Steffen Seibert wrote on his Twitter account. "Iran temporarily denied flyover rights for the Chancellor's plane. A late landing in Delhi." A Reuters journalist travelling with Merkel reported that Iran had withdrawn the previously granted rights shortly before the plan reached Iranian territory.
Officials in the German delegation travelling with Merkel attributed it to "coordination problems." The plane, carrying a large group of industry representatives and reporters, was forced to circle over Turkey before Iran gave it permission to fly over the country.
A second German government plane that left Berlin earlier reached India without any problems.