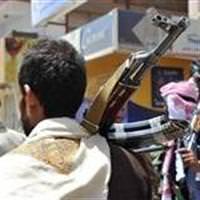 Street fighting raged across the Yemeni capital on Tuesday after a tenuous truce broke down between tribal groups and forces loyal to President Ali Abdullah Saleh, edging the impoverished Arab country closer to civil war.

U.N. human rights chief Navi Pillay said his office had received as yet not fully confirmed reports that more than 50 people had been killed by Yemeni government forces since Sunday.

Global powers have been pressing Saleh to sign a Gulf-led deal to hand over power to try to stem the growing chaos in Yemen, home to al Qaeda militants and neighbor to the world's biggest oil exporter, Saudi Arabia. The turmoil has been a factor keeping up oil prices on Tuesday, traders said.

"The ceasefire agreement has ended," a government official said on Tuesday adding that tribal groups had gained control of a government building.

On Tuesday, there were three main flashpoints in the troubled country with street fighting in the capital; government troops gunning down protesters in Taiz and a battle with al Qaeda and Islamic militants in the coastal city of Zinjibar.

A senior U.N. official condemned the violence by Saleh's forces, but the wily veteran has defied calls from global leaders, elements in his own military and tens of thousands of Yemeni protesters to end his nearly 33-year-rule which has brought the state close to financial ruin.

Overnight battles in the capital brought an end to the truce brokered at the weekend. More than 115 people were killed last week in urban battles with machine guns, mortars and rocket propelled grenades in the bloodiest fighting since anti-government protests began months ago.

In Sanaa, several explosions were heard over the staccato of automatic gun fire in the district of Hasaba, the scene of nearly a week of fighting between Saleh's forces and tribesmen.

The fighting was too heavy for officials to bring bodies off the street or provide casualty figures.

The fighting last week between members of the powerful Hashed tribe led by Sadeq al-Ahmar and Saleh's security forces widened to areas outside the capital where tribesmen squared off against Saleh's elite Republican Guard.

"The situation in Yemen seems to be deteriorating. The problem with Yemen is that it is next to Saudi Arabia, and it has been a source of terrorist attacks against Saudi Arabia," said Tony Nunan, a Tokyo-based risk manager at Mitsubishi Corp.

Saleh's forces fired on hundreds of protesters in Taiz, about 200 km (120 miles) south of the capital, who were trying to gather at the focal point of rallies dubbed "Freedom Square," 0witnesses and a Reuters cameraman in the city said.

At least three people have been killed and scores wounded in the latest fighting, medical sources said.

"The UN human rights office has received reports, which remain to be fully verified, that more than 50 people have been killed since Sunday in Taiz by Yemeni Army, Republican Guards and other government-affiliated elements," Pillay said in an internet posting.

"Such reprehensible acts of violence and indiscriminate attacks on unarmed civilians by armed security officers must stop immediately," Pillay said.

More protests are planned for later on Tuesday across the country.

Further south, government troops and locals have been trying to force al Qaeda and Islamist militants from the coastal city of Zinjibar after they seized the town at the weekend.

Saba news agency reported on Tuesday that 21 Yemeni soldiers had been killed a day earlier in the clashes where Yemen's air force dropped bombs on the city of 20,000 near the Gulf of Aden.

Residents said bodies were strewn on the streets, the national bank building was burned and explosions rocked the city from which most people have fled.

The United States and Saudi Arabia, both targets of attacks by Yemen-based al Qaeda in the Arabian Peninsula, are worried that chaos is emboldening the group.

Opposition leaders have accused Saleh of deliberately allowing Zinjibar, near a sea lane where about 3 million barrels of oil pass daily, to fall to al Qaeda to try to show how chaotic Yemen would be without him.

Yemen's military said in an internet posting that 21 soldiers have been killed and dozens wounded in fighting over the last three days.

Separately, residents said another five soldiers were killed when their military convoy was ambushed by Islamist militants en route to Zinjibar. The rest of the convoy then pulled back.

Opposition groups made up of tribal leaders, Islamists and leftists have said they could do a far better job of curtailing the al Qaeda threat.

At least 320 people have been killed in fighting since protests started in Yemen about four months ago, inspired by the popular uprisings that ended the reign of the long-standing rulers of Tunisia and Egypt.

Under Saleh, Yemen has edged to the brink of financial collapse, with about 40 percent of the population living on less than $2 a day and a third facing chronic hunger.