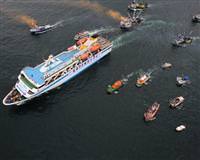 Israel's top general said on Tuesday the military is making preparations to stop a new aid flotilla that pro-Palestinian groups plan to dispatch in late June to the Gaza Strip in defiance of an Israeli naval blockade.

In the Gaza Strip, its Hamas rulers marked the first anniversary of a deadly Israeli raid on a convoy bound for the enclave by unveiling a memorial to the nine Turks killed by navy commandos who clashed with activists wielding clubs and knives.

"We are preparing for the flotilla in accordance with the orders of the Israeli government," Lieutenant-General Benny Ganz, the military's chief of staff, was quoted by an official as telling a parliamentary committee.

"We are preparing to stop it."

The official, who briefs reporters on the deliberations of the Foreign Affairs and Defense Committee, did not elaborate on Ganz's testimony.

Israeli media have reported that commandos were revising their tactics in the wake of the May 31, 2010 raid that strained Israel's relations with Turkey and drew international criticism that led to an easing of its land blockade of Gaza.

At a news conference in Turkey on Monday on the deck of the Mavi Marmara, the vessel where the confrontation occurred, a coalition of 22 pro-Palestinian activist groups called on governments to press Israel to avoid a repeat of the bloodshed.

The groups said 15 ships, including the Mavi Marmara, would be in the new flotilla, carrying 1,500 people from around 100 countries, humanitarian aid and construction materials.

Turkish leaders and the activists have termed Israel's blockade illegal. Israel says the restrictions help prevent more weapons from being smuggled into Gaza, where Hamas, which has called for its destruction, has been in control since 2007.
Egypt eased travel restrictions for Gaza residents on Saturday, eroding the blockade, but a spokesman for the "Gaza Freedom Flotilla II" vowed to keep challenging it.

"We deplore these comments and we demand they be withdrawn," Haniyeh said, urging the United Nations to "carry out its duties and commitments toward an occupied people."

Organizers of the convoy, he said, must "press ahead and not hesitate, for the sake of their brothers in Gaza."