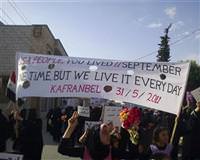 Syrian President Bashar al-Assad issued a general amnesty on Tuesday, state television said, after ten weeks of protests against his 11-year rule and a military crackdown which has drawn international condemnation.

The amnesty covers "all members of political movements, including the Muslim Brotherhood," it said. Membership of the Brotherhood, which led an armed uprising against Assad's father in 1982, is punishable by death in Syria.

Assad's move was the latest in a series of reforms -- including lifting a 48-year state of emergency and granting citizenship to stateless Kurds in eastern Syria -- aimed at addressing the grievances of protesters.

But those steps have been accompanied by a ruthless military crackdown in which rights campaigners say 1,000 civilians have been killed and more than 10,000 people arrested.

Khalaf Ali Khalaf, an organizer of a Syrian opposition conference taking place in Turkey, said the amnesty "comes too late to appease the street, like vague and halfhearted promises for reform that preceded it."

"He has talked reform but we have seen very little in the way of action... he needs to take steps -- concrete steps, not rhetoric -- to address what is going on in the country," U.S. State Department spokesman Mark Toner said.

Activists said at least five people were killed on Tuesday when tanks shelled the central town of Rastan and security forces stormed Hirak, a town in the southern Hauran Plain where the uprising first broke out in mid-March.

Syria blames the violence on armed groups, Islamists and foreign agitators, saying more than 120 police and soldiers have been killed in the unrest nationwide.

The official SANA news agency said two soldiers were killed in an operation to arrest "armed terrorist groups" in Rastan. It quoted a military source saying army and security forces seized weapons and ammunition in Rastan and killed or injured "a number of armed terrorists."

The United States, which has called Assad's repression of protests "barbaric, and the European Union, have announced sanctions against the president and senior Syrian officials.

Western nations have also been pushing for the United Nations Security Council to condemn the violent repression in Syria, but veto-wielding council members Russia and China have both expressed reservations over a draft resolution.

"The Chinese government supports Syria's efforts to protect its sovereignty and stability and we hope that stability and order in Syria will be restored as soon as possible," Chinese Foreign Ministry spokeswoman Jiang Yu told a news briefing.

"In the current circumstances, we believe that the adoption of the U.N. Security Council resolution would do no good for the easing of tensions and stability in Syria."

The U.N. children's agency UNICEF called on Syria to investigate reports of "horrific acts" of violence against children detained during the current wave of unrest.

In a statement, UNICEF said use of live ammunition against demonstrators had reportedly killed at least 30 children, although it said it could not independently confirm that figure or the circumstances of their death.

Syrian television said on Tuesday the Interior Minister Mohammad al-Shaar had launched an investigation into the killing of Hamza Khatib, a 13-year-old boy who activists say died after being tortured in detention. Footage of his bruised and bloodied body has been widely disseminated on the Internet.

U.S. Secretary of State Hillary Clinton said the report showed a collapse of Assad's will to listen to his people.

"President Assad has a choice, and every day that goes by the choice is made by default. He has not called an end to the violence against his own people, and he has not engaged seriously in any kind of reform efforts," she said.

"Every day that goes by the position of the government becomes less tenable and the demands of the Syrian people for change only grow stronger."

One of the main demands of protesters has been the release of political prisoners, as well as curbing the all-powerful security forces and ending corruption. The ruling Baath Party has banned opposition and curbed political freedoms since 1963.

Protests have spread across the country, although the two main cities of Damascus and Aleppo, where security forces are heavily deployed, have yet to witness major sustained protests.

The central province of Homs, north of Damascus, has seen some of the biggest demonstrations and is the latest focus of the military campaign to crush dissent.

Tuesday's violence brings to 16 the number of civilians killed since troops and tanks surrounded towns and villages in the Homs region on Sunday, according to tallies by activists. Officials say six members of the security forces have been killed in the same operation.

Assad assumed power when his father, Hafez al-Assad, died in 2000 after three decades of rule. The elder Assad crushed an armed Muslim Brotherhood uprising in Hama in 1982, flattening part of the old city and killing many thousands.

The younger Assad has reinforced his father's close ties with Iran and its support for militant groups Hezbollah and Hamas, while holding intermittent peace talks with Israel which seized the Golan Heights from Syria in a 1967 war.