Japan PM survives with offer to quit once crisis overcome 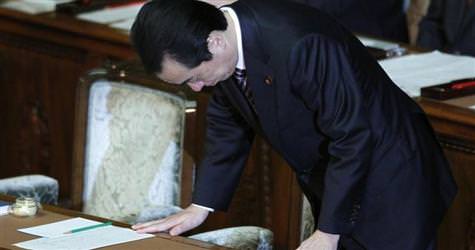 Japanese Prime Minister Naoto Kan on Thursday survived a no-confidence vote by offering to resign once he has overcome the worst of the country's nuclear crisis, a last-minute deal with ruling party rebels who had threatened to turf him from office.

Kan's offer to step down, probably in the autumn, buys him time to prepare an extra budget to fund the rebuilding cost of the March 11 earthquake and tsunami, but it does nothing to resolve the country's political and policy paralysis.

Thanks to Kan's maneuvering, the parliamentary no-confidence motion -- brought by the opposition over his handling of the country's deepest crisis since World War Two -- was comfortably defeated by 293 to 152 votes.

However, weakened by rifts within his own party, Kan may be seen as a lame duck by an emboldened opposition and will likely struggle to make much progress on tax and social security reforms needed to contain the nation's bulging debt.

"There is no change in the sense that political uncertainty still exists," said Seiji Adachi, senior economist at Deutsche Securities in Tokyo.

"But at least the worst case scenario has been avoided. If the no-confidence motion had passed it would have created a political vacuum capable of significantly delaying post-disaster reconstruction.

Speaking shortly before the vote, Kan told ruling Democratic Party of Japan (DPJ) lawmakers he would step down later.

"I would like for the younger generation to take over various responsibilities once I fulfill certain roles that I need to, as I work on handling the disaster," a solemn Kan told the gathering.

Some ruling party rebels, fearing Kan's dismal ratings were hurting their chances of re-election, had said they wanted him out sooner and threatened to side with the opposition.

The prime minister's offer helped him win back the support of several potential rebels, including his predecessor, Yukio Hatoyama, and members of a group led by party powerbroker and Kan rival Ichiro Ozawa.

Japanese voters are likely to welcome the deal since a majority want Kan to leave, but not in the middle of a crisis.

Kan did not say when he might resign, but Hatoyama suggested that could happen once the outlook for an extra budget to fund rebuilding from the tsunami was clear, which would probably be around August or September.

Kan, who took office almost exactly a year ago as Japan's fifth minister in as many years, is battling to control a radiation crisis at the Fukushima plant which was knocked out by the tsunami.

He also needs to come up with a solution to pay for rebuilding the tsunami-hit region north of Tokyo, and prepare tax reforms to pay for rising social security costs.

The uncertain outlook has kept financial markets on edge. Lead 10-year Japanese government bond futures rose above 141.17 to a six-month high after Kan hinted he may step down on hopes that it would allow for a smooth transfer of power and prevent political turmoil.

But the breathing space for Kan probably dampens short-term prospects for a "grand coalition" between the Democrats and their biggest rival, the Liberal Democratic Party (LDP), disappointing those who had hoped a new grouping could break a policy logjam in the country's fractured parliament.