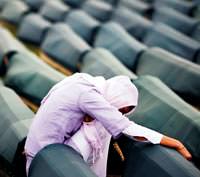 Former Bosnian Serb military commander Ratko Mladic used his power to commit atrocities that tore a nation apart and destroyed communities, and he must be held to account, a U.N. war crimes prosecutor said on Wednesday.

Chief prosecutor Serge Brammertz said Mladic, who was arrested in Serbia last Thursday and extradited after 16 years on the run, will face genocide charges at the International Criminal Tribunal for the former Yugoslavia on Friday.

The 69-year-old career soldier was branded "the butcher of the Balkans" for his campaign to seize territory for Serbs after Bosnia, following Croatia, broke away from the Serb-dominated Yugoslav federation of six republics in the early 1990s.

But Serb nationalists believe Mladic simply defended the nation and did nothing worse on the battlefield than Croats or Bosnian Muslims.

Court registrar John Hocking, speaking to reporters in The Hague, contradicted comments by Mladic's lawyer and son that the ex-general, arrested alone in a Serbian farmhouse, was disoriented and mentally unfit for extradition.

"He was extremely cooperative. He made no comment on the charges against him. He asked a lot about procedures," Hocking said. "He was really paying attention and listening to the information we provided. We had good communication."

Mladic was indicted 16 years ago over the 43-month siege of the Bosnian capital Sarajevo and the massacre of 8,000 Muslim men and boys in Srebrenica during the 1992-95 Bosnian war -- the worst massacre in Europe since World War Two.

Brammertz said his capture had come "very late but not too late" for justice to be done.

A court doctor was at the airport to meet Mladic after a flight from Belgrade. Following a brief examination, he was pronounced fit to be transported to the Scheveningen jail.

Bosnia's ambassador to the Netherlands, Miranda Sidran-Kamisalic, said Mladic was "very, very talkative" during a meeting of over an hour for consular assistance.

"He was coming down the stairs with some difficulty. But afterwards, when he started to talk, he really gave an impression of a quite healthy elderly man who was completely prepared for the procedure," Sidran-Kamisalic told Reuters.

Mladic has yet to meet former Bosnian Serb political leader Radovan Karadzic who has been on trial since 2009 and is held at the same detention unit, lawyers for both men said.

Prosecutors may still seek to try Mladic and Karadzic together. Both were jointly indicted in 1995. But such a scenario could substantially delay Karadzic's trial.

Karadzic's legal adviser Peter Robinson said he and Karadzic will speak with Mladic and his defense team before deciding on the possible linking of the cases. "That hasn't happened yet and won't likely happen for a few days at least," Robinson said.

Mladic, rarely pictured without his camouflage field uniform and distinctive Serbian officer's cap, was wearing a suit and tie as he arrived in The Hague. He spent the night in isolation and was undergoing routine medical tests.

Mladic has been quoted as saying he would rather kill himself than end up at the tribunal. When arrested he had two guns in his possession but made no attempt to use them.

"Mladic was the highest-ranking Bosnian Serb military leader during the wars in Bosnia. He is charged with responsibility for the role that he and his military forces played in the violent criminal campaigns that swept across Bosnia and Herzegovina," Brammertz said.

"His crimes left communities broken and a nation torn apart. 16 years is a long time to wait for justice. It is a long time to know that someone responsible for this trauma is walking free. Now he must answer to these serious international crimes."

Mladic's swift extradition is expected to smooth Serbia's progress toward candidacy for European Union membership and may serve as a warning to others indicted on similar charges, such as Libya's Muammar Gaddafi and Sudanese President Omar Al Bashir.

Brammertz said Serbia's EU aspirations had been a "very important" incentive to bring him in. He also has asked Serbia to explain how Mladic managed to evade arrest for so long.

"We want to verify who over the past five years has been instrumental in helping Mladic to stay in hiding and we want them to be accountable," the prosecutor said.