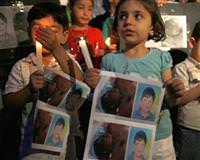 Syrian forces killed at least 13 civilians in the central town of Rastan Thursday, activists said, in the latest attempt to quell a revolt against the 11-year rule of President Bashar al-Assad.

Secretary of State Hillary Clinton said Assad's legitimacy had "nearly run out" and called for a more united international response to the crackdown in Syria.

Syria's exiled opposition, meeting in Turkey, urged Assad to resign immediately and hand power to the vice president until a council is formed to oversee a transition to democracy.

"The delegates have committed to the demands of the Syrian people to bring down the regime and support the people's revolution for freedom and dignity," said a communique issued by 300 opposition figures after two days of talks in Antalya.

Security forces backed by tanks have laid siege to Rastan, a town of 60,000, since Sunday in an effort to crush protests.

The 13 dead were shot by snipers and troops who imposed a curfew, Ammar Qurabi, head of the Syrian National Organization for Human Rights, and lawyer Razan Zaitouna told Reuters.

Tuesday, shelling killed 41, including a four-year-old girl, Zaitouna said. At least 200 people have been arrested.

Syria has barred most international media, making it difficult to verify accounts of the violence.

"There have been rare instances of people who have seen their parents, wives or children being killed, (people) taking their personal weapons and trying to resist. But they were smothered by the overwhelming and unjustifiable force being used by the authorities," he told Reuters at the meeting in Turkey.

He said his organization had the names of 1,113 civilians killed since anti-Assad protests erupted on March 18.

Syria blames the unrest on armed groups backed by Islamists and foreign powers. Assad has sent security forces and tanks to several flashpoints, including Deraa, Banias and Tal Kelakh, a border town near Lebanon, and now Rastan.

While the crackdown on Rastan intensified, authorities began freeing hundreds of political prisoners after Assad issued a general amnesty, the Syrian Observatory for Human Rights said.

A blend of force and reformist gestures has failed to quell the movement against Assad. Instead it has provoked world condemnation and sanctions as the civilian toll rises.

Two U.N. special advisers, Francis Deng and Edward Luck, voiced alarm Thursday about the Syrian authorities' "systematic and deliberate attacks" against civilians in a joint statement and urged an investigation.

Rami Abdelrahman, the Observatory's director, said most of those released under the amnesty were protesters from the suburbs of Damascus, the cities of Banias, Homs and Latakia, as well as Deraa in the south and the eastern Hasaka region.

Rights groups estimate that more than 10,000 people have been rounded up since protests erupted in mid-March.

Abbas Abbas, a 69-year-old leftist who had already spent 15 years as a political prisoner and was sentenced to seven years in jail earlier this year for the same charge, was also freed this week.

The amnesty does not seem to have covered teenage blogger Tal al-Molouhy, sentenced to five years in jail earlier this year on charges of revealing information to a foreign country, despite U.S. calls to release her, Abdelrahman said.

Molouhy had written Internet postings in which she said she longed for a role in shaping the direction of Syria.

Along with the amnesty, Assad has launched preparations for a national dialogue, but opposition figures, activists and protesters say this means little while repression continues.

In Antalya, the meeting of exiled activists elected a 31 member consultative council representing a wide spectrum of the opposition to support the demonstrations and help raise international pressure against Assad.

"This is the first time that the opposition has met on this scale. The message is clear: the Syrians are united to achieve the national goal of peaceful democratic change," said Najib Ghadbian, a political science professor who was elected to the council.

At first wary of more instability in the region, Western powers have stepped up measures against Assad, imposing sanctions against him and senior figures in his government.

"When you see such large-scale, directed action by a head of government against his own civilian population, including the murder of a 13-year-old boy and his torture, then the deepest questions arise in the minds of the people of the world as to whether any claims of legitimacy remains," Rudd said.

The death of Hamza al-Khatib, aged 13, who rights groups says was tortured and killed in custody, has drawn outrage around the world and spurred more protests in Syria.

Syrian authorities deny he was tortured, saying he was killed at a demonstration in which armed gangs shot at guards.