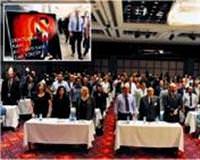 Syria's exiled opposition called on President Bashar al-Assad on Thursday to resign immediately and hand power to the vice president until a council is formed to transform the country to democracy.

"The delegates have committed to the demands of the Syrian people to bring down the regime and support the people's revolution for freedom and dignity," said a communique issued by 300 delegates at the conclusion of a two-day meeting in Turkey that brought together various opposition groups, activists and independent figures, some from inside Syria.

The communique said the opposition refuses any foreign intervention to topple Assad and that the revolt in Syria is a national movement "that does not aim to undermine any sect," in reference to Syria's Alawite minority, from which the ruling hierarch and most of the security apparatus are drawn.

The conference, the first by activists since the uprising against Assad erupted 11 weeks ago, elected a 31 member consultative council to support the demonstrations and help raise international pressure against Assad.

"This is the first time that the opposition has met on this scale. The message is clear: the Syrian are united to achieve the national goal of peaceful democratic change," said Najib Ghadbian a political science professor who was elected to the council.