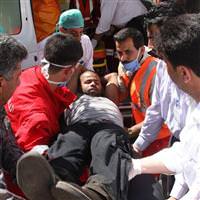 At least 35 civilians and 10 soldiers and police have been killed since Saturday in a military operation in and around a northwestern Syrian town, the Syrian Observatory for Human Rights said on Sunday.

Protests against President Bashar al-Assad have grown despite reform gestures dismissed by the opposition and a continuing crackdown that has killed at least 1,100 people since the uprising erupted two months ago.
Residents said the killings in northwestern Jisr al-Shughour began when snipers on the roof of the main post office fired at a funeral for six protesters killed during a demonstration on Friday.
Angry mourners set fire to the post office after the shooting, said one Jisr al-Shughour resident, a history teacher who gave his name only as Ahmad.
The Syrian Observatory for Human Rights said 35 civilians and 10 soldiers and police have been killed since Saturday.
The official news agency said "armed terrorist groups" killed four police, attacked public buildings including the post office and "spread terror in the heart of citizens who called on the authorities to intervene forcefully to protect them".
Authorities have prevented most international media from operating in Syria, making it impossible to verify accounts of the violence.
In the eastern city of Deir al-Zor, the centre of an oil producing area, residents said security forces killed four protesters after mourners set ablaze two buildings belonging to Assad's Baath Party, which has ruled Syria since it seized power in 1963.
Residents said they saw two people with hunting rifles fire back at security forces. Overnight, forces had fired at thousands of protesters in the city and wounded scores as they tried to reach a square to topple a statue of late President Hafez al-Assad, Bashar's father.
"The crowd reached President's Square when it was met by ..
bullets from the security police and armoured cars that had deployed there to prevent the 'sanam' (false deity) from being toppled," a witness told Reuters, referring to the 6-metre stone statue of the man who ruled with an iron fist for 30 years
BIGGEST CITY ON SIDELINES Night-time demonstrations have been held daily across Syria to circumvent the heavy security presence, though protests reach a peak after Friday midday prayers
The killings have been eroding support among the country's majority Sunni population for Assad, who is from the minority Alawite sect
Human rights campaigners say security forces shot dead at least 70 protesters in the city of Hama on Friday
But central neighbourhoods in Damascus and most of Syria's second city Aleppo have remained largely quiet as authorities tighten security in the two cities and many wealthy business families worry about instability
The crackdown has raised Western pressure on Assad, 45, who has tried to strengthen his regional clout by reaffirming an alliance with Iran and backing militant groups, while responding to Western offers of better ties
The official state news agency said the prime minister has ordered the formation of a committee to draft a law that would allow "patriotic political parties", but it did not say whether the proposed law would permit opposition to the government
In the tribal region of Deir al-Zor, where most of Syria's 380,000 barrels per day of oil is produced, another resident said protesters were enraged over the killing of Mouath al-Rakkad, a 14-year-old boy who was shot dead on Friday during a demonstration against Assad's rule
He said demonstrators had been trying for a week to reach the big Hafez al-Assad statue
"All the other busts and statues of Hafez I know of had been toppled," said the resident, a doctor who practises in the city
Human rights groups say security forces, troops and gunmen loyal to Assad have killed at least 1,100 people in attacks on protesters and in military assaults and sieges of cities to try to crush street demonstrations since they erupted in southern Syria in March
Syrian authorities say "armed terrorist groups", backed by Islamists and foreign powers, are behind the killings, which have included over 120 soldiers and police
In one of the bloodiest attacks on protesters, security forces killed at least 70 people in Hama on Friday, and there were reports that more bodies had been taken by security forces and dumped in a public park on Sunday, rights campaigners said
"The protest was like a big party. Whole families were marching. Women were carrying flowers and chanting for liberty and to bring down the regime of thugs," said one witness, a veterinarian who lives in Hama
The crackdown in Hama has particular resonance. Forces led by Hafez al-Assad's brother Rifaat killed between 10,000 and 30,000 people there when they put down an armed uprising by the Muslim Brotherhood in 1982
Turkey, once a close ally of Assad, has warned him against "a repetition of Hama". The United States and the European Union have imposed direct sanctions on the Syrian president