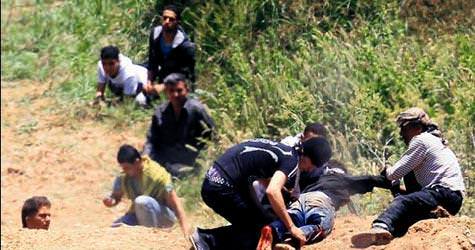 Israeli troops fired at Palestinian demonstrators in Syria who rushed to the frontier fence on Sunday in what Israel called a challenge to its sovereignty. Syrian state-run media said 18 were killed.

"Anyone who tries to cross the border will be killed," Israeli soldiers shouted through loudspeakers at the crowd of several hundred on the Israeli-occupied Golan Heights who rallied to a Facebook call to march to the frontier on the 44th anniversary of the Arab defeat in the 1967 Middle East war.

As darkness fell and heavy mist descended on the high plateau, some protesters lit bonfires close to the fence and said they would remain in the area, Syrian television reported. Israel's Channel 1 in Majdal Shams said most of the protesters had dispersed as the cold night air took hold.

Israel captured Syria's Golan Heights in that conflict, as well as the West Bank and the Gaza Strip, where Palestinians Hwant to establish a state.

Israel has accused Syrian President Bashar al-Assad of permitting the Golan protests to try to divert international attention from his bloody suppression of the popular revolt against his authoritarian rule.

"The Syrian leadership is encouraging events on the Golan Heights in order to divert the world's attention away from the bloodbath they have inflicted on their own people," Dore Gold, a former Israeli ambassador to the United Nations, told Reuters.

Israel is concerned that protests by unarmed demonstrators are a new tactic adopted by Palestinians, inspired by popular revolts in the Arab world, to draw a violent response and gain more world sympathy for their cause.

Israel had been on alert for a repeat of the storming of its frontiers with Syria and Lebanon last month by thousands of Palestinian protesters. Thirteen people were killed in those protests marking the Naqba, what Palestinians term the "catastrophe" of Israel's founding in 1948.

Hundreds of thousands of Palestinians who fled or were driven out of their villages and towns in the 1948 Israeli-Arab war, and their descendants, live in Lebanon, Syria, Jordan and Gaza.

Approaching Israeli lines, Palestinians in Syria descended from a hilltop overlooking the Druze village of Majdal Shams and reached the disputed border, which before last month had been largely tranquil for decades.

Syria's state news agency quoted the director of a Syrian hospital as saying 18 protesters were killed and 277 wounded by Israeli gunfire. Israel Radio said a large number of people were hurt when an anti-tank mine was detonated by a brush fire at Quneitra, another protest venue near the border.

Israel's chief military spokesman, Brigadier-General Yoav Mordechai, said troops had opened fire but he could not confirm any casualties.

"It's a message to anyone who tries to violate Israel's sovereign borders," he said, describing the army's actions as a "measured, focused and proper response."

A Reuters correspondent at the scene saw at least 11 demonstrators carried away on stretchers by the crowd but no sign of any holes in the main border barrier.

"This is like a turkey shoot," said Fuad al-Sha'ar, an apple grower who lives in Majdal Shams.

Protesters did cut through strands of barbed wire that Israel placed in an area between the fence, which is located inside Israeli-occupied territory, and the Syrian frontier designated by U.N. stone markers.

Hours before the violence flared, Prime Minister Benjamin Netanyahu said he had ordered Israeli forces to act with restraint, but with determination, to prevent any border breach.

"To my regret, today there are extremists around us trying to breach our borders, and threaten our towns and citizens. We will not allow this," Netanyahu told his cabinet.

Facing demonstrators waving Palestinian flags, Israeli marksmen crouched in positions along the Syrian frontier. A spotter next to the riflemen peered at the protesters through powerful binoculars.

The event took on the trappings of a spectacle on Israeli television, which broadcast the scene live with running commentary from reporters on the ground.

"Hopa!" exclaimed a correspondent for Israel's Channel 10 television. "A Palestinian youth just bolted from a trench. An Israeli sniper fired at him three times, but it looks like he missed."

Protesters planted Palestinian and Syrian flags near the barrier on the rocky plateau. An Israeli military source said some were carrying pistols but none had been used and that Syrian policemen were among the crowds, but did not elaborate.

In the occupied West Bank, about 100 Palestinian protesters marched to an Israeli military checkpoint, where soldiers fired teargas and the crowd fled.

A Palestinian medic said 14 Palestinians were wounded by rubber bullets in ensuing clashes between stone-throwing youths and Israeli forces, who also deployed a "skunk mobile," a vehicle that sprays demonstrators with a foul-smelling liquid.