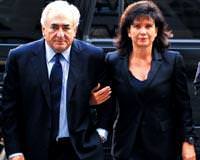 Former IMF chief Dominique Strauss-Kahn pleaded not guilty on Monday to charges he sexually assaulted a New York hotel maid in a case that cost him his job and a chance at the French presidency.

Wearing a dark suit, Strauss-Kahn arrived at the courthouse with his wife, French television journalist Anne Sinclair, walking beside him, arm-in-arm. They were flanked by two private security guards hired to prevent him from skipping bail.

The couple walked past a throng of media and a large group of hotel workers there in solidarity with the woman who said Strauss-Kahn attacked her. "Shame on you," they chanted.

Strauss-Kahn, 62, faces up to 25 years in prison if convicted on charges including attempted rape, sex abuse, a criminal sex act, unlawful imprisonment and forcible touching.

Asked to enter his plea, Strauss-Kahn told the court clerk, "Not guilty." The next date in the case at New York Supreme Court before Judge Michael Obus was set for July 18.

"When the evidence is in, it will be clear there was no forcible compulsion," defense lawyer Benjamin Brafman told reporters after the hearing, confirming he will contend that any sex with the maid was consensual.

But the maid's lawyer, Kenneth Thompson, said the notion that the 32-year-old "hard-working single mother" had consensual sex with Strauss-Kahn was "preposterous."

"All of Dominique Strauss-Kahn's power, money and influence will not stop the truth of what he did to her in that hotel room from coming out," he said. "She is going to come into this courthouse, get into that witness stand and tell the world what (he) did to her."

Strauss-Kahn left the court, holding his wife's hand. the pair looked stoic as they strode to a black Ford SUV as hotel workers shouted at him and news photographers took pictures.

Praised for his role tackling the 2007-09 global financial crisis and attempts to keep Europe's debt crisis under control, Strauss-Kahn resigned as managing director of the International Monetary Fund a few days after his May 14 arrest in the first-class section of an Air France plane, minutes before it was to depart New York for Paris. [ID:nN21449])

He was accused of attacking the maid, an African immigrant, a few hours earlier when she came to clean his suite at the luxury Sofitel hotel in Midtown Manhattan, apparently believing it had been vacated.

Monday's arraignment marks the start of what could be lengthy legal proceedings. [ID:nN03167873])

A new IMF chief has not yet been appointed. French Finance Minister Christine Lagarde and Mexican central bank chief Agustin Carstens both want to replace Strauss-Kahn.

Peter Ward, president of Local 6 of the New York Hotel Workers Union, was among those outside the court in solidarity with the maid. "She's our sister and we support her," he said.

New York hotel worker Beverly Banton said she was once groped by a guest and that while the man was evicted from the hotel, security never called police. "Back then, they said to us, 'The guests come first,'" she said. "There's a lot of people this happened to who didn't say nothing."

Until the New York arrest, Strauss-Kahn had been expected to quit his IMF post for a different reason -- a bid to become the Socialist candidate for president of France. He had been a strong favorite to beat conservative President Nicolas Sarkozy at the polls next year.

Instead, Strauss-Kahn spent four days in New York's Rikers Island jail before he was released on $1 million cash bail and $5 million bond and placed under house arrest with 24-hour armed guards and electronic monitoring.

The father of four daughters spent a few days in a Lower Manhattan apartment but is now living in a luxurious townhouse rented by his wife in Manhattan's TriBeCa district. The townhouse has a gym and home cinema and was last posted for sale for almost $14 million.

A prosecutor estimated Strauss-Kahn would pay $200,000 a month for his security arrangements.

Strauss-Kahn's lawyer has said that although his client has a net worth of roughly $2 million, his wife, an heiress, has deeper pockets. So far, Sinclair has shown no hesitation about using her personal wealth to help her husband.