Syria to send in army after 120 troops killed 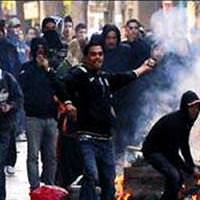 More then 120 Syrian security officers were killed in battles with gunmen, state television said, in the first report of large-scale clashes in a revolt against President Bashar al-Assad.

The report said on Monday armed groups set government buildings ablaze in the northwestern town of Jisr al-Shughour, stole five tonnes of dynamite and were firing at civilians and security forces with machineguns and rocket-propelled grenades.

Wissam Tarif, director of human rights organization Insan, disputed the official report, saying the clashes were between loyalist troops and army members who had defected. He called the number of deaths "inconsistent."

"An army unit or division arrived to the area in the morning. It seems then another unit (in the afternoon) arrived to contain the defection," Tarif told Reuters. He said several people in Jisr al-Shoghour had confirmed that version of events.

Opposition activists said earlier that forces had launched a security operation in the town on Saturday and at least 37 residents and 10 police had been killed. It was impossible to verify the conflicting accounts as authorities have prevented most international media from operating in Syria.

"The security forces have managed to end a blockade of one of the neighborhoods that was seized by the gunmen for awhile and are now battling them to end the blockade of the other neighborhoods," the television said.

"The gunmen mutilated some of the bodies and threw some into the river. The people in Jisr al-Shughour are urging the army to intervene speedily," it said.

Interior Minister Mohammad Ibrahim al-Shaar said authorities would respond firmly to armed attacks and Information Minister Adnan Mahmoud said the army, which has so far stayed out of the town, "will carry out their national duty to restore security."

Rights groups say 1,000 civilians have been killed in protests against the president which have swept from the southern city of Deraa to the Mediterranean coast and eastern Kurdish regions.

French Foreign Minister Alain Juppe said France was ready to ask the U.N. Security Council to vote on a draft resolution condemning Syria for its crackdown despite the threat that Russia would veto the measure.

"The situation is very clear. In Syria, the process of reform is dead and we think that Bashar has lost his legitimacy to rule the country," Juppe said in Washington on Monday.

"We'll see what the Russians will do. If they veto, they will take their responsibility. Maybe if they see that there are 11 votes in favor of the resolution, they will change their mind. So there is a risk to take and we're ready to take it."

Syrian forces crushed an armed Islamist revolt in the city of Hama in 1982 on the orders of Bashar's father, President Hafez al-Assad, killing up to 30,000 people, leading to fears that the ferocity of the crackdown could increase further if the government comes up against an armed insurrection.

An activist told Reuters that police and members of the security forces in Jisr al-Shughour were killed by gunmen.

"Some people in some areas have taken up arms," he said.

"The situation is grave, what is happening is an armed rebellion. I oppose violence from whatever side it comes from."

Residents said violence erupted in Jisr al-Shughour on Saturday when snipers on the roof of the main post office fired at a funeral for six protesters killed the day before.

A rebellion in Jisr al-Shughour was crushed by Bashar's father in 1980 with scores of deaths.

Assad has sent in tanks to crush demonstrations in certain flashpoints.

He also has made some reformist gestures, such as issuing a general amnesty to political prisoners and launching national dialogue, but protesters and opposition figures have dismissed such measures.