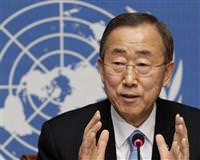 A much-delayed U.N. panel set up to investigate last year's Israeli attack on an aid convoy bound for Gaza is now due to report back next month, U.N. chief Ban Ki-moon said on Monday.

"This panel is still discussing the incident," Ban told reporters. "They will bring me their recommendations and their findings some time in July."

In May of last year, Israeli marines intercepted a six-ship flotilla in international waters and killed eight Turks and a Turkish-American aboard one vessel, the Mavi Marmara, owned by a Turkish Islamic charity.

Israel said its marines were attacked by activists wielding metal bars, clubs and knives, but organizers of the convoy denied that. The incident led to a breakdown in already strained ties between Turkey and Israel.

Ban never publicly set a deadline for it to complete its work, although U.N. officials had originally hoped it might do so first in February and then in April.

Diplomats and U.N. officials have said the panel has been held up by disputes between its Turkish and Israeli members. U.N. spokesman Martin Nesirky suggested last month the group might not be able to produce a consensus document.

Ban said there was still no exact date for the panel to report and that it was "still working very, very hard."

Israel blockades Gaza, a move it says is legal because Palestinian militants in the Hamas-ruled territory fire rockets at the Jewish state. Many states and the United Nations have called for the blockade to be lifted.
Israel says any aid for Gaza should go overland, which in practice has meant through Israel.

Pro-Palestinian groups have said they are planning a new flotilla for Gaza in late June, a move that led Ban to appeal last month for governments to try to dissuade them. He repeated that message on Monday, saying "it is very important to avoid any unnecessary confrontation."