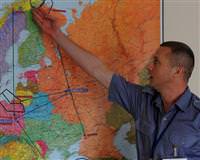 Polish fighter aircraft delivered a hijacked airliner to their Russian counterparts above the two countries' shared border, simulating the level of cooperation they are aiming for in case of attack.

After a 'struggle' in the cockpit of the hijacked plane, in which terrorists were overpowered but the plane's navigation system damaged, the aircraft was guided back to Poland by the Russian fighters.

The showpiece exercises, which both sides say are the first of their kind, are taking place at a time when Russia and NATO are struggling to resolve disagreements over Western plans for a European missile defence system.

"We organised these exercises bearing in mind the joint threats we share as Russia and NATO -- in this case we are looking at the kind of terrorism that developed and came out of Afghanistan," said Yuri Gorlach, an official in the Russian Foreign Ministry's department on European cooperation.

Moscow regularly cites the presence of al Qaeda in a growing insurgency in Russia's restive North Caucasus, where Islamist militants aim to carve out an Islamic state.

Analysts say al Qaeda is trying to expand its presence in Russia after popular revolts in North Africa and the Middle East have undercut their support in those regions.

The four-day exercise, Operation Vigilant Skies 2011, will end on June 9 after NATO and Russian fighters carry out similar drills above the Black Sea and the border area between Norway and Russia.
"These exercises demonstrate the series of practical steps taken between Russia and NATO within the framework of the fight against international terrorism," said NATO representative Istvan Talla.

The only major air attack carried out in or above Russia in recent years was the almost simultaneous detonation of bombs aboard two Russian passenger planes in August 2004, killing all 90 people aboard the two aircraft. Authorities said two Chechen women were the bombers.

Russia-NATO ties were frozen after Russia's war with NATO aspirant Georgia in 2008, but have since thawed.

Still, a meeting of Russian and NATO defence ministers on Wednesday may focus on persistent discord over U.S. and NATO plans for a European missile shield, which Moscow says it fears could weaken the effectiveness of its nuclear arsenal.

Talks on missile defence cooperation have brought little tangible progress. Russian President Dmitry Medvedev has warned that failure to reach an agreement could force Russia to build up its arsenal and lead to a new arms race.

The current exercises were organised as a showcase for the NATO-Russia Cooperative Airspace Initiative, designed to prevent attacks by civilian aircraft such as those carried out in the United States on September 11, 2001.

The system, coordinated from centres in Warsaw and Moscow, with additional local coordination sites in Russia, Norway and Turkey, is intended to provide a shared radar picture of air traffic to give early warning of suspicious air activity.